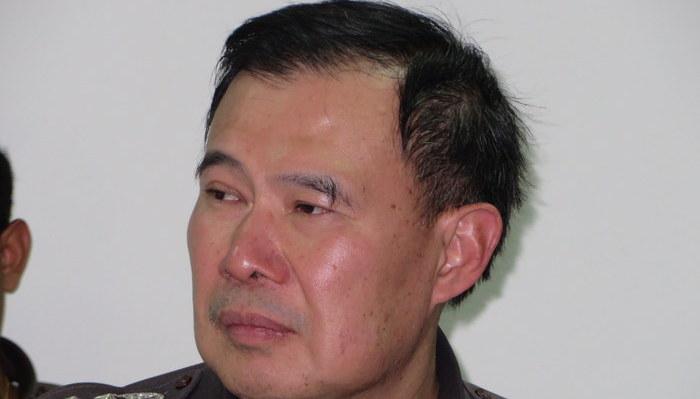 PHUKET: Chalong Police Superintendent Krittapas Dazintharasorn, who was transferred to the Thalang Police Station in early April when he and his officers came under fire for alleged extortion, returned to take up the reins in Chalong on May 1.

The charges against the Chalong police were filed in the wake of 20 dive instructors being rounded up by Chalong cops and Tourist Police on March 10 (story here). The divers were not charged for any criminal activity but were allegedly asked to make cash payments to officers.

When asked about the ensuing national-level investigation by the Public-sector Anti Corruption Commission (PACC), re-instated Col Krittapas confirmed that he was no longer under investigation.

Col Krittapas confirmed that the PACC had concluded its case with the recommendation that two Chalong Police officers be charged with extortion (story here).

The PACC has refused to reveal the officers’ names until formal charges are made.

Unlike Col Sirisak Wasasiri, who replaced Col Krittapas during the investigation, Col Krittapas said that he had not instituted new measures to prevent extortion.

“My officers know I won’t tolerate extortion. It’s a delicate issue and can have a negative effect on Phuket’s tourism image,” he said.

“Still, it’s difficult for me to control completely. We have about 100 officers in the Chalong Police Station. I can’t keep an eye on every single one of them.”

While Col Sirisak was in charge at Chalong Police Station, all officers were forced to provide daily reports of their activities, inform Col Sirisak each time they left the station on police work and provide the results of their efforts when they returned.

At the time of the of the switch, Phuket’s top cop Ong-art Phiewruangnont said, “I moved Col Krittapas Dazintharasorn out of Chalong partly because of the extortion charges, but also because he has been there a long time and developed close relationships with his men, which makes it hard for him to maintain discipline,” (story here).

When contacted today, Maj Gen Ong-art said that since Col Krittapas had survived the PACC investigation, there were no issues with him returning to the Chalong station.

“As for the relationship between him and his men, that is for him to manage. I believe that if he finds any of his men being bad cops, he will control and discipline those officers,” Maj Gen Ong-art said.

In an effort to clarify ambiguous wording in work permits that Phuket Governor Maitri Inthusut noted could be abused by officers, the Phuket Employment Office led an inspection of every dive shop on the island (story here) and organized a seminar scheduled for May 22 to help clarify employment laws for those in the dive industry (story here).

Formal charges are expected to levied against the two Chalong officers by the end of the month, Director of Suppression of Corruption in Public Sector 4 Wannop Somjintanakul told the Phuket Gazette on Saturday.