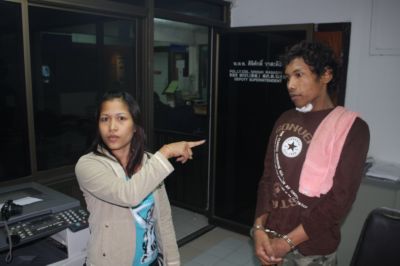 KATA: With the wave of snatch-and-run robberies in Chalong Police District making national television news in recent days, police there have been under intense pressure to put the guilty behind bars.

Their first break came early yesterday morning with the arrest of a construction worker whose crime spree came to an abrupt halt at about 4 am when he crashed his rented motorbike at high speed into a parked pickup truck along a road in Kata.

As Ms Gopkul Se-jorhor was reporting a bag snatching to police at about 2 am yesterday, construction worker Manop “Nop” Tongboon, a native of Phichit province, was stashing the stolen handbag at his current home, a construction site near the Municipality Health Clinic in Kata. He then, according to Chalong police, went out in search of his next victim.

At about 4 am, Nop struck again, snatching the bag of Orchid Resort Hotel employee Oranee Chalermchol in similar fashion.

By that time the roads were being scoured by police who had gathered more clues from the company that had rented the motorbike to Nop.

Because he thought that someone was pursuing him, Nop, who told police that he had been high on alcohol and ya bah, sped up and then smashed into the pickup. Sub Lt Chatchawan Poonaruemit found him conscious but disoriented and took him to hospital before going to Chalong Police Station.

At the station, Ms Gopkul, an employee of the Moonlight Bar, said that “At around 2 am, he followed me past Club Med, then drove alongside and began pushing my bike with his foot. Then he ripped my handbag from my shoulder, breaking the strap before speeding away. There was 1,120 baht and a five-thousand-baht pair of sunglasses from my German boyfriend in my handbag.”

Nop said at the station that after a binge on alcohol and amphetamines, the sight of the key in the motorcycle’s ignition proved too tempting and he decided to drive around Kata and “have some more fun.”

“This is the first time I have behaved like this in Phuket,” Nop averred.

When asked if he stole elsewhere, he replied, “In Bangkok I did the same thing. I cannot remember how many times, but by the time the Klong Luang Police caught me I had collected over 800,000 baht worth of stuff. They sent me to Tanyaburi Prison for three years, but I was let out after two years for good behavior.”

“In Bangkok, my arrest made the front pages of national newspapers. I do not wish to be famous again. Can we not make some deal?” he asked the police.

“I would never steal a bag from a foreigner as that is not good for the tourist industry and the police and courts would be very hard on me if I was caught stealing from a foreigner, so I only steal from Thai girls.

“My wife is eight months’ pregnant and I would love to see my child born. My last wife left me when I was caught bag snatching in Bangkok. I think my new wife will be more loyal to me though,” said Nop.

Ms Gopkul told Nop, “So you steal from girls do you? Be careful. One day it might not be a real girl, but a ladyboy who would probably beat you to death.”

When asked if there were more bag snatchers working in the Rawai/Kata area, the duty officer at Chalong police station told the Gazette that, “We are still actively trying to track down bag-snatchers. Usually they are hard to catch as most of them are from upcountry and only strike using rented motorbikes. They often leave the island after carrying out a crime.”

Are you ready to Walk & Run?