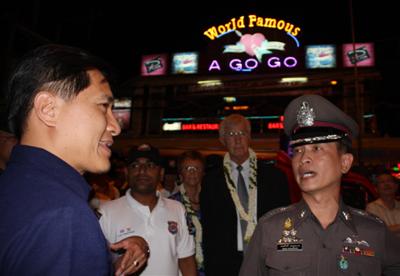 PATONG: Philanderers be warned: Phuket’s premier adult entertainment district is gearing up for a huge expansion in its closed-circuit television (CCTV) coverage, with real-time images of the action along Soi Bangla to be available to the public online 24 hours a day by year’s end, according to the town’s top cop.

Kathu Police Superintendent Col Grissak Songmoonnark told the Gazette that the existing 16 CCTV cameras in Patong will be supplemented with 26 more units, 16 of which will be provided by the Savoey Seafood restaurant on Thaweewong Rd.

All of the new cameras, to be installed along Soi Bangla and the beach road, will show viewers around the world just how safe and friendly Patong is for tourists, he said.

CCTV security is a policy of national police chief Patcharawat Wongsuwan. Police Region 8 commander Santarn Chayanon has assigned Phuket Provincial Police chief Apirak Hongtong to evaluate which parts of Phuket, if any, should have CCTV,” Col Grissak told the Gazette.

Maj Gen Apirak thinks that coverage in other parts of the island, including Chalong and Phuket City, also should be intensified, he said.

All 16 cameras funded by the restaurant will be installed along Soi Bangla, he said.

“If there are any criminal activities there, these cameras will help us investigate and catch the culprits. The images will be broadcast via the Internet, which means that the public can also help us watch what is going on. Businesses will be able to use [these images as] web feeds [on their own websites] as public relations tools,” he said.

“The cameras will not damage the tourism industry at all, because most tourists do not come to buy girls out of the bars. It is perfectly natural for them to have dinner and then go down to the bars for a few drinks and a fun night out with their friends. It is only a very small minority that will pay the bar fine to take a girl out for dinner,” said Col Grissak

“The cameras are not installed in an obtrusive way. They do not create the feeling that one’s privacy is being invaded. I have selected all the locations for installation. Patong Mayor Pian Keesin has set December 15 as the deadline for this project, but we would like to have it operational earlier than then,” he said.

The owner of Savoey Seafood Restaurant, who asked that his name not be published, told the Gazette, “I am very worried about my businesses here in Patong and have a vested interest in protecting the city, especially now that rebels in the three southern provinces have threatened to expand [their attacks] throughout the South, including Phuket.

“I have a lot of CCTV experience, as I am also the owner of a five-star hotel. The systems here in Thailand always seem to have problems, so I have imported a complete system from Singapore with the 16-camera system costing a total of about 1 million baht.

“The system I have provided for Soi Bangla includes digital recording that is stored for 30 days. Each camera has infrared ‘night vision’ capability that enables clear-image recording even in total darkness.

“The software used with the cameras incorporates artificial-intelligence features that can automatically generate warning messages that can be sent as SMS messages to mobile phones.

“Each camera can be pre-programmed with time and spatial parameters. If a ‘forbidden zone’ is entered, a message can be generated. The cameras can even detect whether a person has abandoned a package somewhere,” he added.