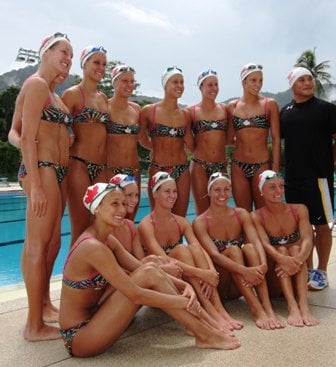 PHUKET: The Canadian Olympic synchronized swimming team are training in Phuket ahead of the 14th FINA World Championships in Shanghai from July 16 to 31.

Speaking exclusively to the Phuket Gazette this morning at a practice session, team coach Julie Sauvé and captain Marie-Pier Boudreau-Gagnon spoke of the team’s medal chances in Shanghai and at next year’s Olympic Games in London.

“Synchro Canada” are using facilities at Thanyapura Sports and Leisure Club, which they rate as one of the best in the world, to choreograph and fine tune their aquatic routines.

Next week, the Canadians travel to challenge the world’s best synchronized swimming teams such as China, Spain and Russia in hope of becoming world champions.

“Canada is now one of the best synchronized swimming teams in the world. We look forward to competing in China and then our goal is to win two gold medals at the Pan American games in Mexico this October. This will give us automatic qualification to the 2012 Olympics,” Julie told the Gazette.

PGTV was also on hand to capture the interview and was given an exclusive sneak preview of their team routine which they perform to Queen’s Bicycle Race and Bohemian Rhapsody.

Pick up a copy of this week’s Gazette for the full interview and photographs of these amazing Olympic athletes.