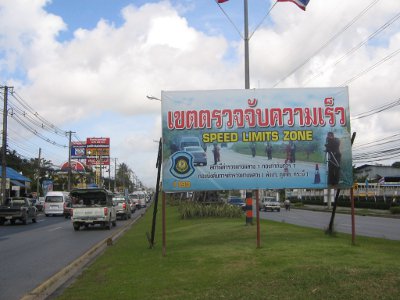 PHUKET: The mobile Cabinet meeting on Tuesday approved 23 projects worth 628 million baht that can be developed immediately in five provinces along the Andaman coast, including a network of speed cameras in Phuket.

For the 23 projects slated for immediate start-up, the Cabinet ordered that plans be hurriedly drawn up and presented to the Budget Bureau within two weeks, said Prime Minister’s Office deputy spokesperson Chalitrat Chandarubeksa.

Other projects were approved on a province-by-province basis, including six in Phuket:

As previously reported, a committee led by Prime Minister Yingluck Shinawatra on Tuesday approved a three-year, 5.79bn baht plan to increase the annual capacity of Phuket International Airport to 12.5 million passengers and a 128-million baht elevated road project in Wichit.

The Cabinet also agreed on 117 proposals estimated at 84.06 billion baht for future development. Of these, 10 encompass all the Andaman coastal provinces and cost 24.87bn baht. The remainder are individual provincial projects costing a total of 59.26bn baht.

The committee also proposed spending about 20 billion baht on making the rail link between Bangkok and the Malaysian border town of Padang Besar in Songkhla a dual-track railway, according to Bloomberg.

Padang Besar, well-known to expatriates making “visa runs” to Penang from Bangkok, is currently serviced by a single-rail track that has not been upgraded by the State Railway of Thailand in decades.

A proposed rail route along the Andaman coast, valued at 58bn baht, is also under study by the Cabinet, said Payungsak Chartsutipol, chairman of the Federation of Thai Industries.

Updated on March 23, 2012: Chao Fa East Road will be the site of 20mn baht improvements, not Chao Fa West as first reported.