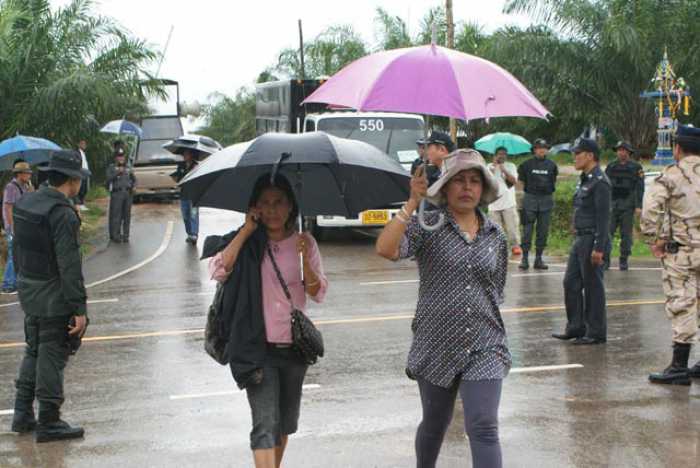 “We told the people that they had to leave the area before noon,” said Bunnsueb Samakrad, director of the Forest Resource Management.

“This land belongs to the Royal Forest Department. After the palm oil company’s licence for the land expired, no one should have moved onto the land. This is why they must go.”

The squatters took over the plot in July last year, after Univanich Palm Oil’s concession licence expired, as part of a demand for the government to allocate land to the poor under a Cabinet resolution in 2003 (story here).

Those staying on the land left without protest today. Officers were able to begin taking down all of the illegal buildings, including 50 permanent houses and 80 temporary shacks.

“We have set up a perimeter around the land, which will be patrolled by officers so that people cannot sneak back in,” said Mr Bunnsueb.

Earlier this year, about100 people rallied outside Krabi City Hall to condemn the police and related officials following claims that they had used excessive force to disperse a group of protesting squatters that were refusing to vacate the land on May 18.

“We are still searching for the 85 protest leaders who avoided arrest when officers were here earlier this year,” added Mr Bunnsueb.