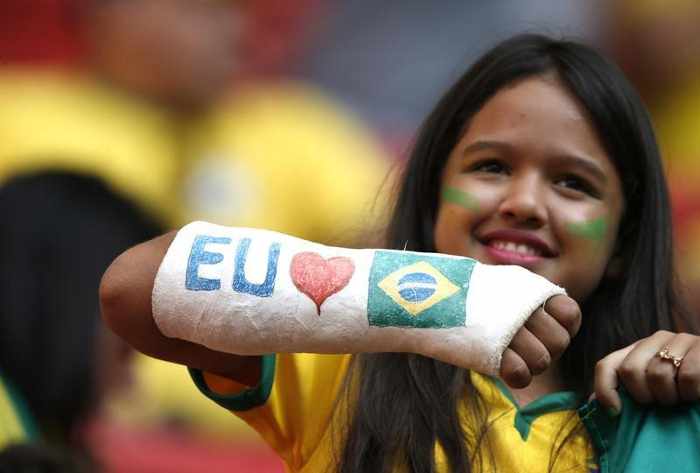 RIO DE JANEIRO – The 2014 World Cup provided an unmatched level of football, outstanding individual moments, shocks, some controversy and it all took place in stadiums packed with knowledgeable and passionate fans.

Taken as a whole, the 64 games in Brazil, were unparalleled as a World Cup in terms of quality of football, with constant entertainment in the group stage, then tension and excellence in defending in the knockout phase as the leading powers advanced.

Every tournament has its memorable moments – Carlos Alberto’s wonderful fourth goal as Brazil crushed Italy in the 1970 final and Maradona’s magical solo goal against England in 1986 being two of the most enduring.

The 1954 World Cup, when West Germany stunned the previously dominant Hungarians in the final, and the 1958 tournament in Sweden, with the young Pele awakening the world to the skills of Brazilian football, were both tournaments which provided lovers of the game with plenty to appreciate.

But what made 2014 so special was that the quality and tactical sophistication was spread across so many teams, with very few nations looking out of their depth.

Costa Rica reached the quarter-finals for the first time and only missed out on a place in the last four after a penalty shootout against the Netherlands.

The Costa Ricans, who barely figured in most pre-tournament calculations, finished above three former world champions in England, Italy and Uruguay in their group – not by luck or purely effort but by playing good, intelligent football.

Colombia and Mexico impressed and could easily have gone much further, the United States provided excitement for the rapidly growing fan-base in their country and even minnows Iran went close to beating Argentina, the eventual runners-up.

In contrast, traditional powers who were not ready to compete with the best were quickly exposed, none more so than holders Spain who were crushed 5-1 by the Netherlands in their opening game and failed to make it to the second round.

Spain’s tiki-taka short-passing possession football had dominated the game for the past six years but it was dismissively swept aside by fast-paced pass and move football and relentless pressing.

Most remarkably, hosts Brazil, tipped by many to win the tournament, showed that that judgement was based on no more than nostalgia and perceived home advantage.

They were fortunate to make the last four, but their weaknesses were ruthlessly exposed by Germany in a 7-1 victory that stands as the most extraordinary result the tournament has ever seen.

Despite the strong showing of unheralded teams, the knockout phase did see the best sides progress – all the group winners got through their second round games and then the favorite won the quarterfinals.

While caution limited excitement in the knockout phase, the negativity was largely restricted to tactics rather than dirty play, time-wasting or unsporting conduct.

According to FIFA the number of injuries was down by about 40 percent, a remarkable statistic given the increased pace and athleticism of the contemporary game.

Technology also had a positive impact. The use of vanishing spray at free-kicks reduced arguing and sped up the game, while goal-line technology was introduced without any issues.

Dissent and abuse of the referees were largely absent and there were few cases of off-the-ball incidents.

Only 10 red cards were shown in the tournament, down from a record 28 in 2006, although one should have been shown to Uruguay’s controversial striker Luis Suarez after his bite on the shoulder of Giorgio Chiellini.

Diving, however, remains a problem. The skill of players in ‘drawing contact’ and then exaggerating their fall makes it very difficult for referees and can, as Mexico’s exit after an Arjen Robben-created penalty showed, leave a bitter taste.

But off the field, the fears of organizational chaos proved unfounded – the stadiums were ready, the airports functioned without major problem and fans enjoyed the tournament with no significant incidents.

Brazil supporters, even though their side were a major disappointment, contributed hugely to the success of the finals by picking teams, usually the underdogs, and making sure the atmosphere in stadiums was rarely of the sterile kind that has undermined some recent tournaments.

But the protests in Brazil in the run up to the World Cup highlighted a serious issue – was there really a need to spend so much money on new stadiums in a country with acute social problems?

The atmosphere might have been even better, as well as more socially responsible, if games were in older Brazilian venues with more modest upgrades and if ticket prices were affordable for the working class fan.

But, in the end, the World Cup got the right champions because Germany were the most complete and effective team despite a valiant effort by Lionel Messi-inspired Argentina, who were undone by Mario Goetze’s superb strike in the final.

New talent emerged, something rare in this globalized age, with Colombia’s James Rodriguez, the tournament’s top scorer with six goals, the most exciting to shine.

There was a joint record number of goals (171) but also outstanding defending with the role of the defensive midfielder emerging as fundamental – as Argentina’s Javier Mascherano highlighted.

In a nutshell the tournament had everything.

It was a magnificent showcase for modern international football – shorn of the influence of money that distorts the club game.

The debate will no doubt continue, but 2014 has a very strong case to be considered the best World Cup of all time.