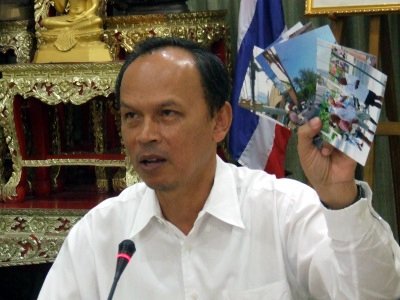 PHUKET: A high-powered task force set up by the Phuket Governor yesterday declared war on illegal timeshare operators in Phuket. The focus is on those that use bait and switch and other illegal tactics to bilk up to a billion baht from unsuspecting tourists.

“Phuket Governor Tri Augkaradacha is very serious about solving the problems with timeshare companies and he has ordered updates every 15 days on any progress made,” Vice Governor Somkiet Sangkaosutthirak told the task force panel at a meeting yesterday.

“Some government officials are involved in this, but we will not give up,” he added.

Phuket Provincial Employment Office chief Noppadol Ployudee said, “One business can make up to a billion baht and most of the money is sent abroad. A lot of money is involved in this and it seems as if they are mafia.”

He explained that some timeshare companies had requested and been granted permission to set up booths to market their products, but instead sent employees out on motorcycles to find customers.

“Their staff drive out and give lottery tickets to tourists. Later they tell the tourists that they won and ask them to go to their offices. Once there, other staff members try to sell timeshare products to them,” said Weerawit Kuresombut, President of the Entertainment Association in Patong.

“Timeshare problems like these have been damaging our tourism [industry] for the past five years. Timeshare companies can help tourism a lot if they follow the regulations, but companies that just cheat consumers affect tourism negatively instead,” Mr Weerawit added.

Employees of illegal timeshare companies go to beaches and hand out forms – some even bearing the Tourism Authority of Thailand (TAT) logo – to tourists, who then provide personal information. Once those tourists return to their hotels, the timeshare companies call them continuously, he said.

“Their staff can generate customer networks numbering in the tens of thousands, with each customer paying up to 300,000 baht, some paying over a million.

“It is a lucrative business. In the high season they can make 10 million euros and one staff member can earn up to 100,000 baht [even] in the low season,” Mr Chairat said.

Buayan Suwanmanee, director of the Phuket Office of Tourism and Sports, said the problem of bogus logos was not restricted to Patong.

“One tourist complained that he got to the airport and a man gave him a form with the TAT logo on it, but he did not realize that it said ‘Tourism Association of Thailand’ rather than ‘Tourism Authority of Thailand’.

“When he got to his hotel, a man who spoke his native language kept calling him. He said that no businesses bothered him like this when he went to Chiang Mai,” Mr Buayan said.

The task force agreed that the first step in tackling the problems would be to start investigating all 142 legally registered timeshare operators on the island.

V/Gov Somkiet said that another meeting would be held soon to discuss how to move forward from there.

Before adjourning the meeting, V/Gov Somkiet joked that he would probably need to give committee members bulletproof vests.