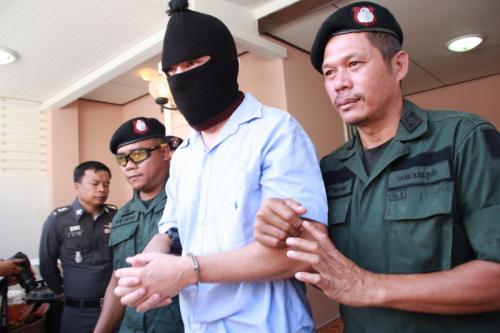 PHUKET: Samui police, acting on a tip from their counterparts in Hungary, yesterday dug up a skeleton in the basement of a villa owned by Moshe David, who is currently awaiting trial in Phuket for the murder of Hungarian Peter Reisz last year (story here).

The bones are believed to belong to Laszlo Csepai, 39, a Hungarian billionaire and business partner of Mr David who has been missing since February 2011, explained Surat Thani Provincial Police Commander Kiattipong Khaosum-ang.

“We found the bones yesterday at about 1pm. They were buried at a depth of about three meters in the basement of a villa owned by Mr David,” Maj Gen Kiattipong said.

“The skull was broken and appeared to have been hit by a hard object,” he said.

Mr Csepai’s family had reported him missing to Hungarian police and hired a detective to find him. The detective was then able to locate a Hungarian businessman who had worked with both Mr David and Mr Csepai. The man was reported to the police and brought in for questioning, Maj Gen Kiattipong explained.

“The man told police that Mr David killed Mr Csepai and then asked him to help bury his body in the basement of his villa.

“He also claimed that Mr David threatened to kill him if he told anyone,” Maj Gen Kiattipong said.

Hungarian police then contacted police in Samui to check if the bones were buried under the villa, leading to yesterday’s discovery.

“We have sent the bones to the Institute of Forensic Medicine at Police General Hospital in Bangkok to determine if they are Mr Csepai’s,” Maj Gen Kiattipong said.

“If they are, Mr David will be brought to Samui for questioning,” he added.

“If the evidence indicates that Mr David killed Mr Csepai, he will be charged with murder. If he is found guilty of murder in Phuket, he will have to serve out his prison term there before being tried here,” Maj Gen Kiattipong explained.