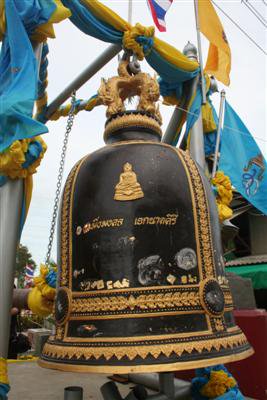 KARON: Work on the the enormous Buddha image in the Nakkerd Hills is now about 90% complete and a huge bronze bell was installed at the site to mark King Chulalongkorn Memorial Day on Thursday.

The one-million baht bell, which weighs one metric ton, was a gift from the Rassada Cooperative Credit Union.

Work on the image, officially known as Phra Puttamingmongkol Akenakkiri, is now about 90% complete, according to the Mingmongkol Faith 45 committee that has funded the project though fund raising efforts.

Vice Governor Worapot Ratthasima attended the Buddhist ceremony at which gold leaf was applied to the bell and it was struck for the first time on Chulalakorn Day.

The entire Mingmongkol Buddha project, to include a landscaped park and museum, is expected to be complete by 2010, at a total cost in excess of 150 million baht.

Once completed, the 45-meter-high Buddha image is expected to become Phuket’s most popular man-made tourist attraction.

There has also been talk of installing a cable car from Patong to the site, which sits atop a 380-meter hilltop.