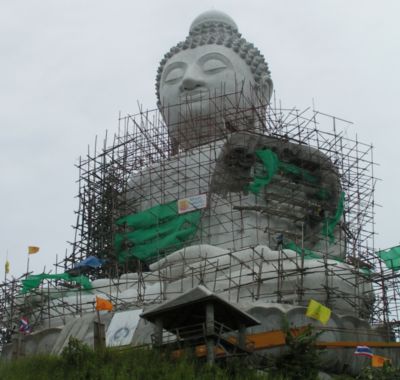 CHALONG: The total cost of Phuket’s Big Buddha image on top of the Nakkerd Hills between Kata-Karon and Chalong is predicted to surpass 100 million baht, said Suporn Vanichkul, President of the Mingmongkol Faith 45 committee, which is raising funds for the project.

K. Suporn told the Gazette that the structural work on the Big Buddha is almost finished and that work on the jade exterior is about 80% complete, with the front of the image completely covered and a portion of the back still to be finished.

“We began work on the jade covering about a year ago. The jade sheets were imported from Myanmar. Each sheet measures 15 by 15 centimeters and 2cm thick. We use epoxy glue on the body of the image to give a strong bond. It is very difficult work because the sheets of jade are like glass and a strong adhesive is needed,” he said.

Work on the Big Buddha image, known officially as Phra Puttamingmongkol Akenakkiri, began six years ago. The completed structure will be 45 meters tall and 25 meters wide at the base.

After the jade exterior of the body has been attached, the 40 lotus petal images around the base of the Big Buddha will be decorated.

“Each lotus petal is 6m long. We will cover them with sheets of marble from Saraburi province. This will take about one year to complete,” said K. Suporn.

“Alongside the Buddha image, work has been carried out on the concrete access road that runs from the foot of the hill. The road is about four kilometers long and we have already paved the sharpest corners and the steepest parts for safety. Only about 2km of the road still need to be paved,” he said.

“The total cost of the project now stands at 60 million baht,” he added.

Inside the image will be a 436-square-meter museum to display Buddhist exhibitions. Work on the museum will start after the lotus base is finished, followed by work on a meditation park and a grass area for candle-lit processions, said K. Suporn.

“We need about 20 million baht to complete the work on the statue, road and museum. We then need another 20 million baht for the meditation park and procession area. The total cost of the project will be about 100 million baht,” he said.

“It is amazing to see the work being done with help from many people, including monetary donations and help from experts in the field of construction. Prasit Lubliam joined the team as our Buddha image expert, while Burapa Rodari is our resident expert on all the stone decoration,” he added.

“We have had donations from all over the world, even from people who are not Buddhists. Some Muslims from Turkey were unable to donate money, but gave us their flags to decorate the image with.

“We now have tourists visiting every day, including big groups from hotels and resorts around the island. The tourists are impressed by the work and they have been donating money. We have about 400 to 500 visitors each day on weekends,” said K. Suporn.

The Big Buddha image, which sits 400 meters above sea level, is in the pang marnvichai meditation posture.