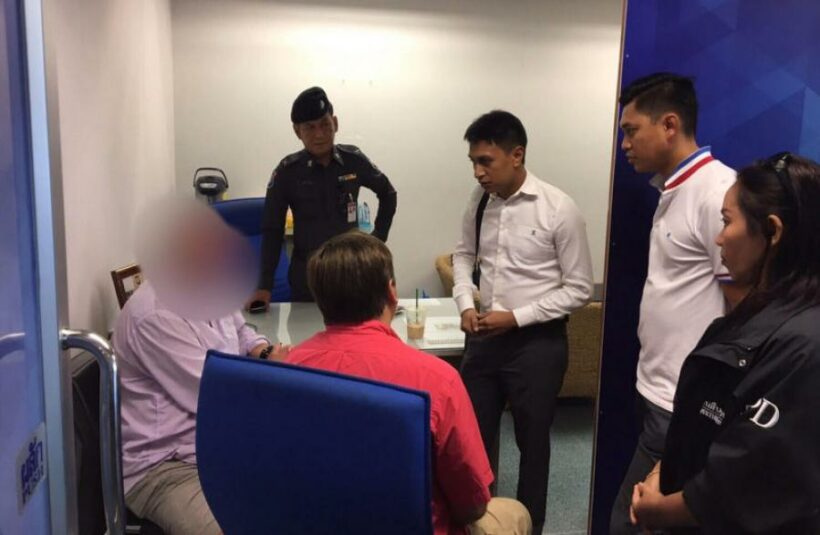 PHUKET: A Belgian tourist was arrested at Phuket International Airport yesterday, more than two weeks after he reportedly stole a mobile phone accessory from an electronics store in Phuket.

Tourist Police were able to apprehend the suspect, Oliver Jerome Georges Verhaeghe, 58, while he was waiting to board Qatar Airways flight QR841 to Doha.

Mr Verhaeghe was originally seen stealing on CCTV on May 26 by staff at ‘Remax’, an electronics store on Yaowarat Road (story here). The footage was widely shared on social media.

An arrest warrant for him was issued by Phuket Provincial Court on June 2 after police were able to use his credit card information (which he had used to purchase some items) to identify him.

“We were able to track his movements and obtain his departure schedule. We found out he would be leaving Phuket on June 12, so our officers were prepared to apprehend him before he left,” said Thitirach Nongharnpitak, commissioner of the Central Investigation Bureau.

A team led by Gen Thongchai Wilaiprom of the Phuket Tourist Police made the arrest.

“Mr Verhaeghe confessed to stealing a car mobile phone holder and was charged with theft. We also found the stolen item in his luggage,” said Gen Thongchai.