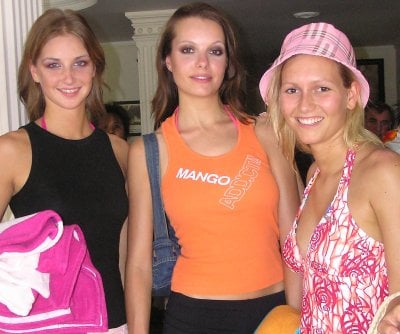 PHUKET: Bang Tao Beach has had more than its fair share of glamor in the past few days as Miss Belgium Beauty 2005, Cynthia Reekmans, along with models Sasja Beullens and Kathleen Claes, posed for fashion photographer Henk Van Cauwenbergh in the shooting of the annual Showbizz calendar.

Brigitta Callens, Miss Belgium 1999, and make-up artist, told the Gazette that the Showbizz calendar is comparable with the famous Pirelli calendar but appears only in Belgium.

Ms Callens said, “Part of the profits from the Showbizz calendar will go to the Light After the Tsunami Foundation, which is a project set up to help orphans of the tsunami in Khao Lak.”

She added that she has been a regular visitor to Thailand for 11 years and has a deep affection for the country, saying that she hopes to promote the region as much as possible.

“These are pure and sensitive people. Thais have warm and open hearts and this makes me want to come back and help Thailand and the Thai people.”

Mr Van Cauwenbergh, who founded the fund-raising program, explained, “There are five children in the project, all of them girls, aged from four to 12 years old. We’ve pledged them scholarships until they graduate with degrees, and we are building houses for them in Khao Lak.”

He added, “We have also donated 1.8 million baht and eight fishing boats for tsunami victims”.