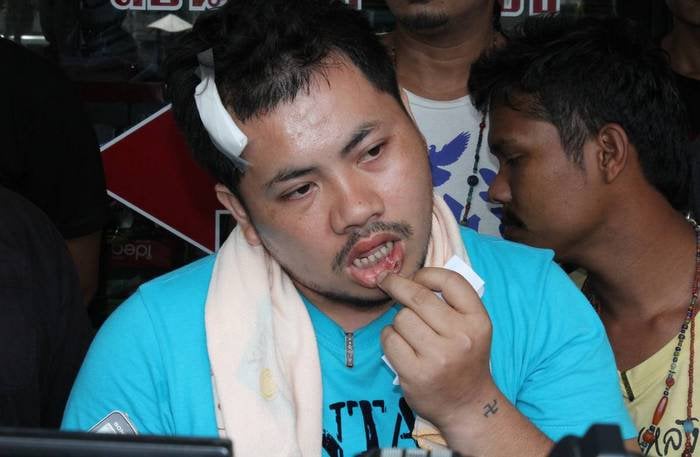 PHUKET: The alleged victim of a vicious attack by police in Patong filed a formal complaint against the officer and others in his party yesterday.

The bouncer at Hollywood nightclub on the party town’s famed Soi Bangla, 29-year-old Kamolchai Singhakerd, told police that Patong Deputy Superintendent Sorapong Chukaew and a group of his officers attacked him at about 2am on June 10.

“It is not the first time he attacked people, and I don’t want him to hurt anyone else,” Mr Kamolchai said. “I hope that he will be removed from the police force. If our town is full of bad cops, who can we go to when we need help?”

Lt Col Sorapong was moved from his post at Patong Police Station to Phuket Provincial Police following a protest with more than 100 participants taking to the street on June 11 (story here).

Mr Kamolchai claims that he did nothing to instigate the confrontation, and that Col Sorapong abruptly attacked him.

“I did not fight back, my friends took me to another pub, but the police chased us there and dragged me out,” Mr Kamolchai said.

Mr Kamolchai told police that the officers forced him to grovel at Col Sorapong’s boots.

“But he kicked me in the chin. Then his friends began to kick me as well,” Mr Kamolchai said.

Afraid of further abuse, Mr Kamolchai went to a friend’s house in Phang Nga after being discharged from Patong Hospital. He returned yesterday to file the complaint.

Col Sorapong has yet to issue an official statement to the press.