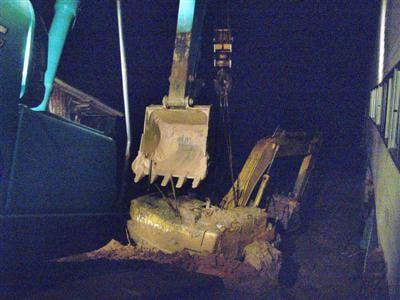 RASSADA, PHUKET: A machine operator is crediting divine intervention for the safe recovery of his backhoe, which was successfully pulled from a saltwater mud flat after a 15-hour operation yesterday.

Backhoe owner-operator Prasert Nakhaphan was contracted by Rassada Municipality to dredge a drainage ditch from a tin mining pond into Phuket Bay in Rassada Village 7.

Access to the work site was tricky, however. Mr Prasert’s Kobelco excavator had to pass through a three-meter gap between two stilted homes on the beach side of a dead-end road, then cross over mud flats to the ditch.

As it crawled toward the sea at about 8:30am, the backhoe got stuck in the mud between the two homes.

A crane was called in to hoist the 12-tonne machine back to dry land, but before it arrived rising tides sucked the machine deeper into the mud.

Two backhoes arrived at 10am to try and dig out the mud engulfing the machine, but to no avail.

At about 9pm a sling was attached to the backhoe, but it snapped under the weight of the excavator and mud holding it in place.

A desperate Mr Prasert then decided to make a peace offering to the local spirits by lighting nine incense sticks.

“I might have unintentionally shown disrespect to the spirits here, so I decided to light the joss sticks as a way to improve the situation,” he said.

Finally, at around midnight, the Kobelco was hoisted from the mire.

“I have been doing this for 10 years and this is the worst accident I’ve ever had,” he said.

The rental cost of the two backhoes and crane would probably set him back at least 60,000 baht, he said.

“As for my backhoe, I have to get it checked to see how badly damaged it is,” he said.