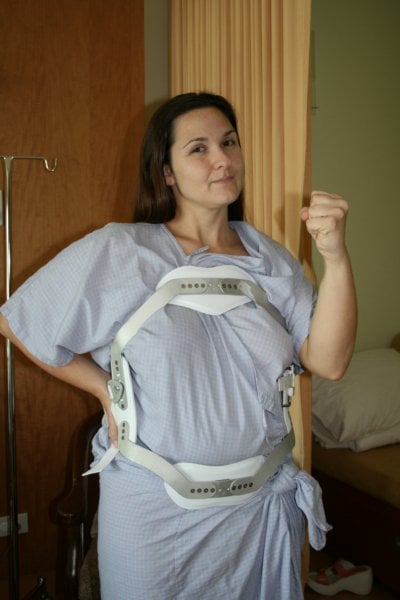 Ms Kelman, 28, a dance and English teacher from St Louis, Missouri, shattered three vertebrae in her back when she jumped into the sea from a height of 20 meters as part of a Phi Phi boat tour.

Doctors later said she was ‘very lucky’ not to slip into paralysis.

A week after a successful spinal fusion operation, which saw doctors implant three metal rods in her lower back, Melissa’s condition was stable enough to make the flight back to her current home in South Korea.

She arrives home a week later than planned and wearing a special back brace, which she will have to wear for five months.

Melissa cannot twist or bend her spine in any direction until the brace is removed.

A professional belly dancer by trade, doctors doubt she will ever dance again.

Melissa resigned from her dance teacher position in South Korea but is hopeful her boss will let her continue to teach English, even with her disability and back brace.

Immediately after her accident, she was taken by boat to Phi Phi Hospital where doctors were unable to diagnose the seriousness of her condition due to the lack of an X-ray machine.

She was then carried in a wheelbarrow – due to lack of transport on Phi Phi – to the ferry wharf and transported back to Phuket laid out on the floor aboard a busy tourist ferry.

She was first taken to Bangkok Phuket Hospital where doctors diagnosed her as having three shattered vertebrae.

Melissa was then transferred to Vachira Phuket Hospital for two days and finally to Phuket International Hospital for her spinal fusion surgery.

She said Phuket’s hospital staff and doctors had been fantastic.

“I would like to thank all at Phuket International Hospital, especially my doctor, Jiradesh Khaosoong, for their amazing work,” she said.

Melissa said she had not been put off Phuket and would return as soon as she was able.

However, her lawyer is currently seeking compensation from the tour company that provided the cliff jump tour.