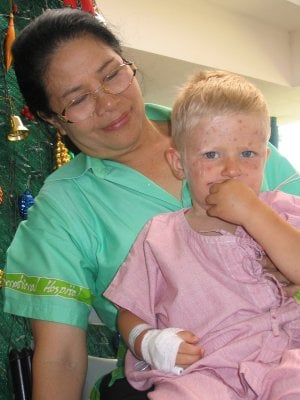 PHUKET: A young boy rescued by a couple and taken to Phuket International Hospital has been identified as a 20-month old Swedish boy.

Family members in Finland saw the photograph of young Hannes Bergstrom on the Phuket Gazette website and contacted the boy’s uncle, Tim Karkkinen, in Pattaya within an hour of the story going online.

Mr Karkkinen told the Gazette that although the father, Marko Bergstrom, and the boy’s grandfather are in Phang Nga Hospital, no trace has as yet been found of the boy’s mother and grandmother.

The family were staying in Khao Lak.

Arrangements are being made to reunite the family.