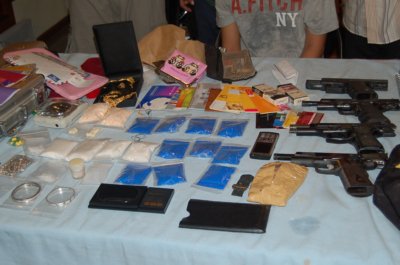 PHUKET: The Narcotics Crime Suppression Bureau carried out a sting operation in Phuket at 2am yesterday, arresting a man and seizing 2,000 ya bah (methamphetamine) pills, 300,000 baht in cash, weapons, vehicles, gold and land.

The value of the items seized totals more than 100 million baht, according to the Narcotics Crime Suppression Bureau.

The suspect was arrested after a policeman pretended to be a buyer in a meeting at a luxury hotel in Phuket.

The suspect, a 44-year-old Chonburi native, is apparently well known to the police as a dealer in illicit goods, such as CDs and watches.

According to arresting officer Col Suttirat Tojamba,the suspect is now being held in Bangkok and faces a ten-year jail sentence. If, however, he confesses to the crime, that sentence may be reduced to five years.

OPINION: TAT should do more for Phuket festival