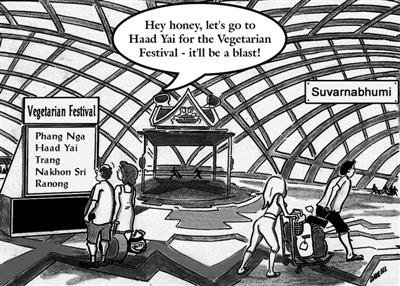 PHUKET: The Vegetarian Festival ends this evening – not just here in Phuket, but also in other ethnic Chinese communities all over the country.

Phuket’s Chinese community rightfully takes great pride in their town being the birthplace of the festival in Thailand –  as well as the fact that Chinese communities in other provinces have followed suit.

The event is said to date back to Phuket’s tin-mining days, when a traveling Chinese opera company came down with a mysterious illness and managed to cure themselves by adhering to a strict vegetarian diet.

Impressed, Kathu residents adopted not only the vegetarian aspect, but also the variety of complex rituals related to the worship of the Nine Emperor Gods.

Over time, the festival began to develop its unique characteristics, evolving, with the help of the Tourism Authority of Thailand (TAT), into something visitors from all over the world came to find exotic, colorful, at times disturbing – but definitely something to write home about.

The festival also provides a boost in tourist arrival figures at a time when they are most welcome – during the rainy season when hotel occupancy rates are usually low.

Although the festival is said to have its roots in Kathu District, the traditional center of activity is Phuket City.

This too may be changing, however, as the festival has spread not only to other parts of the country but also around the island.

Unfortunately, it appears the TAT may now be trying to promote the event more actively in other provinces than here in Phuket.

There was no mention of Phuket.

It is hard to know whether this was a glaring oversight or part of a deliberate TAT plan to promote lesser-known tourist destinations and events across the country, as it has done with its Unseen Thailand promotions.

Even today, the Phuket Vegetarian Festival still doesn’t even appear on the main webpage of the TAT’s listings for ‘Events and Festivals’ in October.

Rather, it is two more clicks away, after such fascinating spectacles as an expatriate ice hockey tournament in Bangkok and buffalo racing in Chonburi, to name but two.

Nor is there any hyperlink to the festival’s excellent homepage or other sources of detailed information about the schedule of events.

It is sad enough that Phuket had to ‘lose’ the recently completed Asean Summit to Hua Hin,ostensibly because hosting it concurrently with the festival was deemed to create a ‘security risk’.

Having so many international media on the island during the festival would have given the event unprecedented exposure.

It would be sadder still if the TAT ceased promoting the festival with full vigor, especially as the event’s success over the years must go down as one of the TAT’s greatest accomplishments.

Fortunately, the festival continues to grow on its own merits and with the help of groups like the Phuket Tourist Association, which is now actively promoting the event to potential tourists from mainland China.