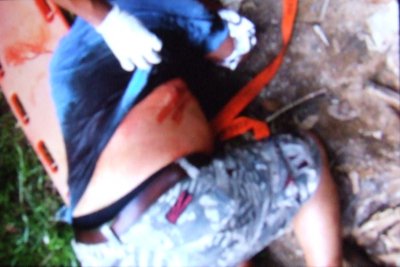 PHUKET: An Austrian tourist is recovering from a punctured lung and other injuries sustained in a brutal robbery attack by four knife-wielding youths in Phuket yesterday.

Mr Wilhelmstatter, in his 50s, was returning by motorbike to his hotel in Patong at 1:45pm when the attack occurred. He was returning from Paradise Beach, on the south end of Patong Bay.

The gang members, aboard two motorbikes, approached the Austrian with one bike on each side.

The youngest gang member, aged 13, kicked out at Mr Wilhelmstatter’s motorbike, causing him to crash. Mr Wilhelmstatter fought back from the ground, but was stabbed and suffered a punctured lung. The gang then robbed him of 200 baht before making their getaway.

Mr Wilhelmstatter was taken to Patong Hospital for emergency treatment, then transferred to the better-equipped Bangkok Hospital in Phuket Town. A source at the privately-run facility confirmed Mr Wilhelmstatter is in the intensive care unit, but declined to give further details.

Police investigating the incident did not need to travel far to make the first arrests. At an address on Ratchapatanusorn Road, just around the corner from Patong Police Station, they arrested two youths aged 13 and 14 at about 5:30pm.

A search of the premises revealed a sheathed knife and one motorbike, both items suspected of having been used in the robbery. After eyewitnesses at the scene of the attack identified the two boys as having been involved, the teens were taken to Patong Police Station for questioning.

The information obtained led to the arrest of a third youth, aged 15, at a house on Thaweewong Road. Police recovered the other motorbike thought to have been used in the attack on the premises. A fourth member of the gang, the one believed to have stabbed Mr Wilhelmstatter, remains at-large.

Subsequent questioning of the gang members revealed they had been involved in at least two other recent robberies using similar methods.

A 13-year-old member of the gang confessed that on November 30 he and four others robbed a tourist near Tri Trang Beach on Muen Ngern Road, not far from the location of yesterday’s attack. At about 5:30pm that day, he and an older boy struck an unidentified foreign man with a wooden club, forcing him off his motorbike. They then threatened him with a knife, robbing him of 200 baht before speeding off.

He also confessed that on the afternoon of December 3 he and four others drove motorbikes to Paradise Beach where they attacked two tourists aboard a single motorbike. They robbed the pair at knife-point, getting away with a camera, a smart phone and 7,000 baht in cash.

The 13-year-old admitted to kicking or hitting the tourists to force them from their motorbikes, but denied stabbing Mr Wilhelmstatter.

The youths spent the 200 baht taken from Mr Wilhelmstatter to buy snacks, he said.