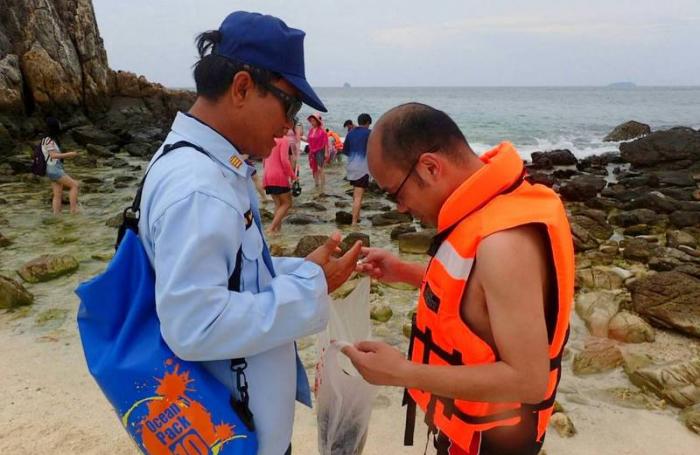 A committee assembled by members of the DMCR’s Region 6 has agreed to expand the powers of DMCR officers and to level harsher punishments for tourists and boat operators who disturb wildlife.

The new punishments, which include up to one year in prison, a 100,000-baht fine, or both, went into effect on Tuesday.

In deploying the new regulations, the committee cited Article 17 of the DMCR regulations, allowing the establishment of any regulations in an area deemed under threat of environmental degradation.

Researchers working with the DMCR said the percentage of living coral surrounding the islands has plummeted, from 80 per cent of the coral recorded as living there in 1991, to less than 10 per cent this year.

“With this new law, we will have the right to immediately arrest tourists, tour guides and boat operators for disturbing or damaging marine life, or being complicit in its destruction, said Mr Watcharin.

Mr Watcharin said the special nature of the islands, which are not technically national parks and are therefore not afforded the same level of protection, compelled the committee to expand the DMCR’s protective powers.

Previous legislation allowed DMCR officers to use the Wildlife Preservation and Protection Act BE 2535 (1992), in which coral is considered a protected animal, to catch and turn over to the police anyone suspected of harming marine life.

Under that act, officers could not arrest people for harming any marine life other than coral. The punishment under that law was a fine of up to 40,000 baht, up to four years in prison, or both.

However, under Article 17, Mr Watcharin said DMCR officers may now detain tourists for harming any marine life, not just coral.

Mr Watcharin said that previously, officers’ willingness to detain and hand suspects over to the police was hampered by a fear of harming tourism. Those fears, he said, have since been addressed by the DMCR committee.

Mr Watcharin said he sees the impunity of boat operators and their tourists changing dramatically with the new law in effect.

“The new law will make them scared,” he said. “It requires us to take them to the police station right away, where they’ll be charged with violating the Wildlife Preservation and Protection Act BE 2535 (1992) and the Marine and Coastal Resources Management Act BE 2558 (2015).

“We have the power now. Let’s see if they do get scared,” Mr Watcharin told the Phuket Gazette. “For example, if a tourist is found torturing fish, he or she will have to face the legal process,” he said.
“They will be taken to a police station and their case will have to go to court,” he said. “That means they’ll not be allowed to leave Thailand until the case is decided.”

Thon Thamrongnawasawat, a member of the National Reform Council (NRC), said that the new regulations will have no effect on the island’s tourism industry.

“Some have asked me, ‘Will we dare to actually arrest tourists, because of the adverse effects it could have on the tourism economy?’. To this I’ve responded, ‘If tourists do something illegal, are we to just ignore it because they are tourists?’,” Mr Thon said.

“I think it only takes a few cases of arresting lawbreakers before others will get scared and never do anything like that. Instead of enjoying their time in Phuket, they’ll spend their holiday in court. No one will choose that.

“We are not closing the islands or limiting the number of tourists that can visit them, like the Department of National Parks and Wildlife Preservation has done with Tai Chai.

“Tourists can enjoy the islands as usual; they just have to obey our laws or face the consequences. Officers from the Tourism Department were involved in the committee and if it really does end up affecting tourism, we’ll address it,” he added.

On May 23, tour operators were called in for a meeting about the new rules with DMCR officials. Boat operators and tour guides said that, for the most part, they were cautiously supportive of the new measures.

“I totally agree with the new regulations, said Gembira Travel & Trading manager Sommit Plookpuet. “Yes, tourism is our livelihood, but if it destroys our marine life, it simply means we’ll have no way of making money. If there’s no more coral and no more fish, they’ll stop coming, so we plan to cooperate completely with the new regulations,” Mr Sommit said.

“While I agree that taking those who disobey the law immediately to the police station is harsh, I do think it will work.

“Honestly, the fines at places like national parks don’t really work,” he added. “No one really cares about a few hundred baht. This new rule will take those who disobey the law to the police station. That wastes their time and it affects their whole day. For sure, folks aren’t going to take those chances.”

“I think the main reason that tourists and operators end up damaging marine life is that there are no clear regulations set up,” Mr Wichai said. “Now, there are. Print the 12 regulations on posters and put them up on the three islands in English, Thai, Chinese and Russian, and let’s see if anyone dares to disobey the law.”

“Sure, Article 17 could be expanded to include other at-risk islands and increase powers of enforcement for our officers, but enforcing the law is not easy,” he said. “We need officers for that. For example, when we arrest a tourist, we have to take him or her to the police station on the shore by boat. If we use this law for many islands, we will not have enough officers for every possible detention. Right now, we’re just focusing on these islands.”

“The real purpose of this regulation is not to have our officers arresting people across the whole sea, but to protect the natural environment around these islands by discouraging their degradation, Mr Watcharin said. “We never want to arrest people; we only want them to obey the law and appreciate the natural beauty of these islands.”

Last of the Rohingya escapees captured