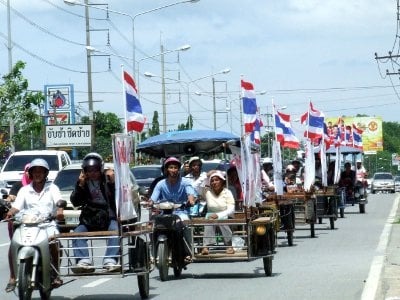 PHUKET: A small band of activists have been rolling through the streets of Phuket in salaeng (motorbikes with sidecar) in recent days, urging the public to ignore a campaign to cast “no” votes in the upcoming general election.

The 30-strong group travels with Thai flags hoisted high and carrying signs that read: “If we vote for nobody, who will run the country?”

Protest leader Krittiapat Wachirakullapat said he fears that if people follow the advice of the People’s Alliance for Democracy (PAD) and vote “none of the above” in the July 3 polling, that “bad candidates” will be able to buy up enough votes to win the election.

“We should choose the ones who are the least bad if we want the country to forward,” he reasoned.

“The PAD doesn’t say what their next move will be if enough people cast ‘no’ votes to invalidate the results, and they might ‘sleep on the road’ [in Bangkok] again if Pheu Thai wins the election,” Mr Krittapat said.

The protest, which started about a week ago, is expected to end soon after the arrival of caretaker Prime Minister Abhisit Vejjajiva in Phuket today.

Mr Abhisit will lead the Democrat Party’s first major campaign rally at Saphan Hin public park in Phuket Town tonight, when he will introduce the Democrat candidates for the 14 southern provinces.

After the rally, the salaeng protesters will dismount their three-wheeled contraptions and follow up with five days of walking door-to-door encouraging people to vote – and not just for nobody, Mr Krittipat said.

“Unfortunately we lack the funding to continue our activities though until election day,” he said.