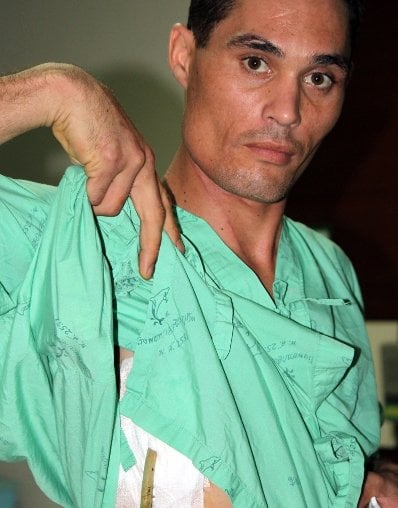 PHUKET: Sean Kenzie, the 27-year-old New Zealander stranded and unable to pay his mounting medical bills after a hit-and run-accident, boarded a plane for home today thanks to an anonymous donor who supplied the funds for his flight.

Sean looked a little tired when he arrived at Phuket Airport; he walked straight to the Thai Airways check-in counter to catch his flight home.

His insurance refused to pay, claiming that motorbike accidents were not covered under his “premium policy”.

Sean told the Phuket Gazette that “thousands and thousands” of people made donations to the Facebook fund his brother Kane started. One anonymous donor put up all the money necessary for Sean’s flight home.

“I’d like to thank the people of New Zealand. They’re awesome; they got behind me and donated money. I probably would have died here if it wasn’t for them,” Sean said.

He explained that he wired more money to the hospital today, as he was finally allowed to leave Phuket after signing an agreement allowing him 365 days to pay off the remainder of his medical expenses.

The hit-and-run accident left him in a coma with the teeth on his right side smashed out, his jaw broken, both lungs collapsed, a split liver and a knee requiring reconstructive surgery.

“The taxi driver must have hit me pretty hard,” he said.

Rescue workers took him to the private hospital for care.

Sean has a vague memory of the incidents preceding the accident. He was driving back to his hotel when he realized he was heading in the wrong direction, so he pulled over to the side of the road, where he was run down.

He could not remember where exactly he was when the accident occurred.

With two collapsed lungs, Sean awoke with two tubes in his chest. He was told they would be removed within two days, but they stayed in place for almost a month.

“I should have been out of the hospital a week ago. This tube was supposed to come out, but… my lung collapsed again,” he explained yesterday.

“They brought me back down to the surgery room and gave me drugs and put the tube back in. I woke up in the afternoon and they kicked me out,” he said.

“I didn’t know what was going on. I had no idea, no clue. All I knew was that they were kicking me out. Then they brought me here [to an open patient ward at Vachira Phuket Hospital].”

After one night, the New Zealand consulate stepped in and had Sean transferred to a private room of the hospital.

Once back in New Zealand, Sean will start down the long path of rehabilitation.

Formerly a roofer in Australia, Sean has been told that he will not be able to return to work for a long time.

“There is no police record; no police have come to see me,” Sean explained to the Gazette. “I’ve been here nearly a month and nobody has come to see me [about the accident]. The taxi that hit me should have had their insurance paying for all of this.”

Despite the horrors of Sean’s first trip to Thailand, he is determined to return.

“I will return to Thailand as the country still owes me my travelling,” he said.