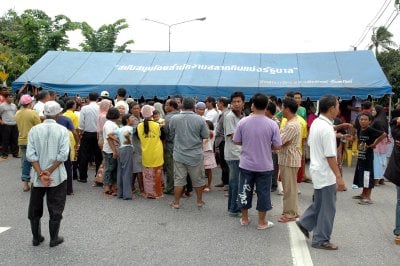 MAI KHAO (Krungthep Turakij): A mob of around 200 villagers from Baan Kho En blocked Thepkrasattri Rd near the entrance to Yacht Haven on Saturday in protest after a local woman was knocked off her motorbike and killed on a tight bend in the road.

Following the accident, at around 1 pm, a crowd came from the village and erected tents in the road, blocking it completely and causing three-kilometer tailbacks.

Leaders of the mob called for the responsible authorities to widen the road to solve the problem of the dangerous bend and also demanded to speak to Governor Udomsak Uswarangkura.

The mob agreed to let traffic pass again only after Vice-Governor Vorapoj Rattasima came to discuss the problem with leaders at 2:30 pm and gave his assurances that he would order the responsible departments to solve the problem as quickly as possible.

Wirat Bailad, a member of the Mai Khao Tambon Administration Organization, said that accidents happened at the curve on average around twice a week but that this incident was particularly bad. He added that villagers had been calling for the problem to be solved for a long time but no one had been interested.

The protest was sparked by the death of Yam Chanwong, 55, who was killed when her motorbike was hit by a pick-up truck driven by Charus Supapreuk from Krabi at 10 am that day.

The motorbike’s pillion passenger, Khwanjai Maidukem, was seriously injured in the accident. Villagers were angered after K. Charus said that K. Yam had cut in front of her, causing the accident. They refused to let her leave until she apologized.