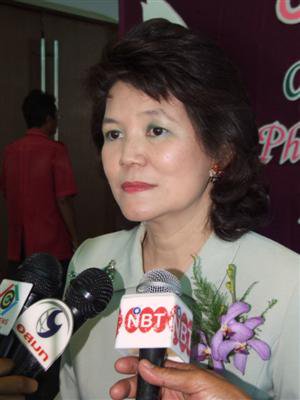 PHUKET CITY: One of Phuket’s leading Democrat Party figures has denied any involvement in the transfer of former governor Preecha Ruangjan and revealed that Dr Preecha requested the transfer.

Anchalee Vanich Thepabutr, Deputy Secretary of the Prime Minister’s Office in Bangkok and wife of Phuket MP Tossaporn Thepabutr, said media reports that she had something to do with the transfer of Dr Preecha were false.

Mrs Anchalee told the Gazette she had no influence over the decisions of coalition partners in the government led by Democrat Party leader Abhisit Vejjajiva.

The decision to transfer Dr Preecha from Phuket to Phitsanuloke and replace him with former Sing Buri governor Wichai Phraisa-ngop was based on a cabinet resolution proposed by Interior Minister Chavarat Chanweerakul, leader of newly formed Bhumjaithai Party, she said.

The Bhumjaithai Party, made up of loyalists to banned Buriram-based politician Newin Chidchob, was handed the highly prized Interior and Transport Ministry portfolios as a way of luring them into the coalition, it has been widely reported.

Mrs Anchalee said that a reliable source in the Governor’s Office told her that Dr Preecha had submitted a formal request to the Interior Minister seeking a transfer to another province, specifying Nakhon Sawan as his preference.

“He gave as his reason the fact that he has more experience in agriculture than tourism,” she quoted the source as saying.

Contacted by phone today, new Phitsanuloke Governor Preecha Ruangjan did not deny he made the transfer request.

Commenting that the issues behind the transfer orders were complex, he said only that he was happy to now be serving as governor of Phitsanuloke, which borders on his native Phichit province.

For analysis on this topic, read the editorial in the upcoming hardcopy version of the Phuket Gazette.