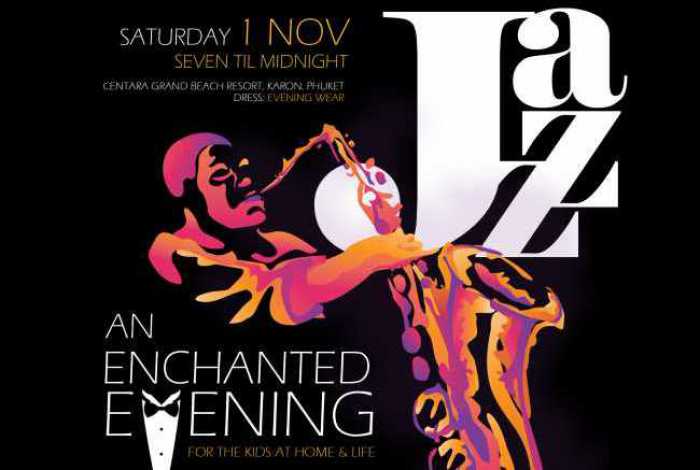 PHUKET: Just months ahead of the 10-year anniversary of the devastating tsunami that left hundreds of orphans in its wake, the the Home & Life orphanage is raising funds for capital improvements.

‘An Enchanted Evening’, to take place at the five-star Centara Grand Beach Resort on November 1, will be an unforgettable experience of art, entertainment, fine wine and gourmet dining prepared by five of Phuket’s top chefs, with all proceeds going to the orphanage, says Larry Amsden.

“One of the highlights will probably be the auctions – both live and silent. You’ve got some items donated by the designers of Iniala, internationally renowned foreign designers. There will be 10 or 12 resort vouchers and airplane rides around Phuket, courtesy of Airpark general manager Pat James and the Phuket Gazette,” Mr Amsden says.

“The auction alone is going to be well worthwhile for people to come along. As you know, in a live auction people can pick up real bargains. And at the end of the evening we’ll be auctioning off the five distinguished chefs themselves. Yes, that’s right, you can ‘buy’ one of them for a fantastic party at your home or just about anywhere else you might wish to have it. This is human trafficking at its very best!”

The orphanage was established after the tsunami.

“There are 25 children right now, and it’s a family. It’s not run like an institution, it’s run like a family. Because of that, this is an organization that we want to support,”Mr Amsden continues.

“They are always hard-pressed for funds. They do get sufficient funds from donations and so on to cover operating costs, but never enough for capital improvements. But they are at the point now where they are forced to make some capital improvements to ensure continued operation for the kids.”

Advance purchases of tickets for this charitable feast are 3,500 baht. At the door on the night, the tickets will be 3,900 baht. If an entire table of eight is booked, the cost is 3,000 baht per person.

Tickets for this and all of Phuket’s other top entertainment events can be booked through ‘Phuket Tickets’ (here) and will be delivered to you anywhere on the island free of charge.