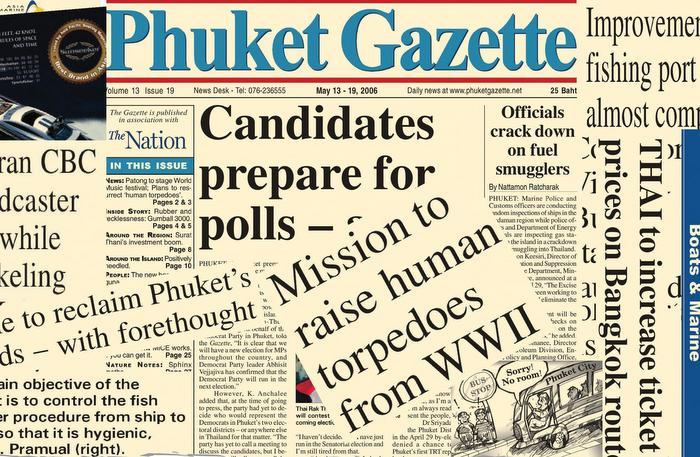 PHUKET: As the Phuket Gazette plunged in with its first-ever Thailand Yacht Show Special Edition, we narrowed the gap in ‘A Decade Ago’ to 9-years-and-9-months ago… for the sake of marine thematics.

Skipping over what is without a doubt a very dry page one at the beginning of the rainy season, let’s dive to the depths of a small story on page three of the May 13, 2006 issue of the Gazette: Mission to raise human torpedoes from WWII.

The Chariots were British designed manned torpedoes that were carried on a submarine and then launched underwater with two frogmen on board. The Chariot would enter an enemy harbor, where the frogmen would place limpet mines on enemy ships before returning to the submarine.

According to Wikipedia, the only completely successful British Chariot operation occurred in Phuket on October 28-29, 1944. Two crews on MK II Chariots, commanded by Lieutenant Tony Eldridge RNVR, were launched from the submarine HMS Trenchant to attack two Italian cargo ships in the harbor of Japanese-occupied Phuket.

After the charges went off, the Sumatra sank and the Volpi was so badly crippled that it was abandoned.

The Chariots were thought to have then been dumped on the seabed near Koh Dok Mai, where they allegedly have remained. That was exactly where Capt Parton hoped to find them.

When asked for permission to begin salvage efforts in May 2006, then-Phuket Governor Udomsak Uswarangkura told Capt Parton that before trying to raise the Chariots he must produce documentation proving that he has permission from the British government, in particular the Ministry of Defence.

Capt Parton sent off the letter, and the reply was delivered to Governor Udomsak.

The letter from the British Navy read, in part, “Both in UK and International law, wrecked military aircraft and vessels remain the property of the state (in this case of the British Crown), regardless of location or condition. Ownership is not lost with the passage of time.

“Moreover, the provisions of the International Convention on Salvage 1989 do not apply to warships; consequently, in international waters and the territorial waters of other states, the wrecks of British military aircraft and warships cannot lawfully be the subject of salvage.

“[The British government’s] permission is needed to recover them and this we are not prepared to grant. We consider the Chariots to be heritage assets and as such they should remain and be studied in situ.”

Though rumors of those hunting the Chariots have cropped up from time to time on the island, no certain proof has been raised from the depths of Koh Dok Mai.

Prior to Cap Parton getting the island excited about the WWII artifacts, Phuket was awash in rumors of a different type of mini-submarine.

“Mini-sub fever, sparked by newspaper reports of a submarine being built in a Phuket shipyard for Sri Lanka’s rebel Tamil Tigers, reached a new pitch with reports of another small sub sighted in the waters off Koh Hey Island,” reported the Gazette in 2000.

A police raid on a boatyard in Rawai turned up three mini-subs, which were very different from a submarine found by the Gazette a few days prior.

The owner and inventor of the subs was named as Sithichai Wonsrivijit, who is the owner of Sea Station Partnership, which runs a diving and snorkelling business at Koh Hey.

“He explained that he is also an inventor – he invented a helmet for sea walking and had just completed building his latest invention. He had taken it out to Koh Hey for a trial run on the day it was spotted,” said then-Chalong Police Superintendent Sati Malakanond.

Though mini-subs are renowned for being the vessel of choice for drug cartels and terrorists, police saw no connections between Mr Sithichai’s mini-sub and the Tamil Tigers or any other foreign organization.

What happened to Mr Sithichai’s design or patent doesn’t seem to have found its way back into the Gazette. However, there is a real market for mini-subs now – especially compact ones… you know, so it fits on your superyacht.

Companies such as U-Boat Worx now offer some of the slickest, most compact submarines with depth capabilities of up to 300 meters.

“More and more owners of existing or future superyachts are deciding to take a personal submersible on board. This was unthinkable just a short while ago. Submersibles were generally too big and too heavy to operate from a superyacht,” explains U-Boat Worx PR.

And you guessed it, that’s now changed. So, why not weigh up whether or not the superyacht has a submersible on board when you start looking at which of these luxury juggernauts to charter in Phuket. Or maybe be a bit naughty and go look for your own WWII relic?