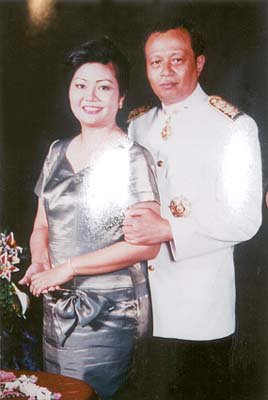 PHUKET TOWN: Murder suspects Wipa Jantong and her husband Sompong Jantong, charged with conspiracy to commit murder in the May 5 slaying of Prasert and Thavorn Trairat, were released from the Phuket Provincial Court Prison on Friday after posting bail of 1.5 million baht each. The couple were arrested on October 1 in front of the offices of the Phuket Town Municipality and found with two firearms in their vehicle. One of the weapons was a 9-mm pistol, the same caliber as the gun used in the slaying. Their bail request was accepted by Phuket Provincial Court over opposition by the Phuket Provincial Police, who felt that the violent nature of the crime should preclude any bail releases. Phuket Provincial Deputy Commander Pol Col Apirak Hongtong told the Gazette, “The police opposed bail for all three people [held by the Phuket Court] but the court allowed it [for Wipa and Sompong].” The court did not, however, grant bail to Suchart Maneesuwan, one of the three men allegedly hired by Wipa and Sompong to carry out the hit on the elderly couple, parents to Thepkrasattri Municipality Mayor Prasong Trairat. Suchart confessed to playing a role in the murder, pointing out the victims to the alleged gunman, whom he identified as Pol Sgt Maj Chalaw Ramduang, formerly of the Sikow District Police in Trang – current whereabouts unknown. A warrant has been issued for Chalaw’s arrest. The fourth man arrested in the case, Army Sgt Sorapong Yaodum, confessed to being the driver and also identified Chalaw as the shooter. Sorapong, who was found hiding out in a shack on Koh Lanta in Krabi late last month, has been turned back over to the Trang Provincial Police for questioning about his possible involvement in two cases there – one of attempted murder and one of criminal misappropriation. After their arrests, both Sorapong and Suchart confessed to charges of conspiracy to commit murder and told police that Wipa and her husband had hired them to carry out the attack.