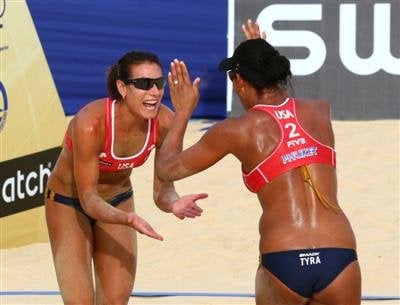 KARON, PHUKET: The US teams of Jen Kessy/April Ross and Angie Akers/Tyra Turner will square off in the championship match of the US$190,000 Phuket Thailand Open this afternoon.

The top two-seeded teams scored semi-final victories yesterday afternoon to advance to the ‘final four’ of the final women’s event on the 2009 world tour.

Bratkova and Ukolova are only the second Russian tandem to ever reach the semi-finals of a tour event. A large contingent of Russian supporters is expected to cheer them on in their quest for a bronze medal today.

Top seeds Kessy and Ross yesterday advanced to their 12th world tour gold medal match in 32 international starts, together with a two-set win over compatriots Fendrick and Ivy.

In today’s championship match, Kessy and Ross will be seeking to defend their Phuket title.

Second-seeded Akers and Turner, competing in their first-ever gold medal match on the tour, advanced with a tight three-set win over Bratkova and Ukolova.

Fendrick and Ivy opened play yesterday with a win over 19th-seeded Chen Xue and Linjun Ji of China before advancing to the semi-finals with a victory (21-19, 18-21, 15-11) over qualifiers Elsa Baquerizo and Liliana Fernandez Steiner of Spain.

Bratkova and Ukolova began play yesterday with a three-set win over sixth-seeded Vassiliki Arvaniti/Maria Tsiartsiani of Greece before claiming a final ‘four spot’ with a win over Sanne Keizer and Marleen Van Iersel of The Netherlands.

With three of four teams going into the semifinals, the US is guaranteed two medals and could pull off a clean sweep if Fendrick/ Ivy can beat the Russians.

It is the 16th-time in the 18-year history of the women’s tour that three US pairs have reached the ‘final four’.

This year’s event, proudly sponsored by the Phuket Gazette, is the biggest and best ever with with 66 teams from 28 countries competing. There is also a an amateur event among sides representing resorts on the island.

Organizer Geoffrey Rowe of Pentangle Promotions said, “The growth of this event has been amazing; the local government has been outstanding. Their support helps drive our local sponsorship program. It is very encouraging when you have the backing.”

Rowe and his staff worked with Karon Municipality to prepare a stretch of beach with an expanded center court, enlarged seating areas and other new facilities.

“We have been encouraged about the response from the players,” Rowe added.

“Combined with our improved facilities and Phuket’s fame as a great tourist spot, we have a lot of advantages in attracting teams and followers. What pleased us Thursday was the response for the Russian teams. We usually have a lot of American and German fans, but Thursday it was a day for Russian followers.”

The awards ceremony is scheduled to begin at 4:30pm.