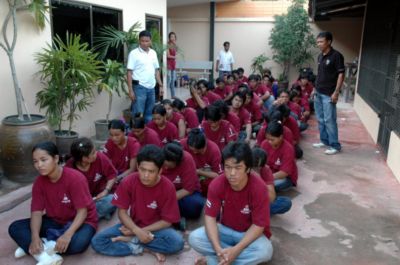 PHUKET CITY: More than 50 Burmese are in the process of being deported after being caught working illegally by Phuket Immigration Police in two raids over the past two days.

Phuket Immigration Police led by Col Chanatpol Yongbunjerd held a press conference at Phuket Immigration headquarters yesterday afternoon to announce the arrest of 43 Burmese workers who were arrested after a truck driven by Thai national Ketkaew Muangsuwan was pulled over on Saiyuan Rd in Rawai yesterday morning.

The workers, riding in the back, were all wearing the same uniforms with the name of the company they were working for and Thai flags sewn into the sleeves.

The workers produced documents identifying themselves as stateless hilltribe people from the north of Thailand with permission to travel and work in Thailand while their requests for citizenship were being processed.

However, a quick check of the documents revealed them as forgeries, Col Chanatpol said.

Phuket Immigration Police Inspector Maj Neti Khanboon said all of the documents were supposedly signed by the same district chief despite the workers claiming to be from different northern provinces, including Chiang Mai and Mae Hong Son.

A check with the district office in question indicated the documents were forged, he said.

The 43 now face deportation while Ketkaew will be charged with assisting in the transport of illegal aliens.

On Thursday, Phuket Immigration Police arrested nine unregistered workers from Laos while they were in the back of a pickup on the way to a construction project in Koh Kaew.

The workers and pickup driver Winai Wanseng, a Thai national, were taken to Thalang Police Station.

Winai faces charges relating to transporting illegal aliens, all of whom will be deported.

Again, the name of the employer was omitted.

The arrests were the latest following a crackdown order on illegal aliens working in Phuket. The order was issued by the Immigration Police’s Southern Regional Office.

The order follows the death of 54 Burmese illegal immigrants who suffocated while being transported in the sealed container of a seafood transport truck en route from Ranong to Phuket on April 9.