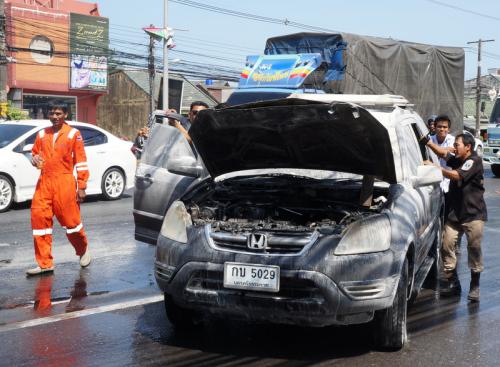 It took villagers about 15 minutes and seven fire extinguishers to put out the fire, explained a Kusoldharm Foundation rescue worker. No one was injured.

“By the time we got there, the fire was already under control. At the scene were two fire extinguishers from the 7-Eleven and four from villagers’ houses,” the rescue worked said.

“I was transferring two passengers from a hotel in Kathu to the airport, when the fire started below the hood of my car. However, I didn’t realize there was a problem until another car stopped at the red light of the Koh Kaew Intersection and pointed it out,” Mr Pakawat told the Phuket Gazette.

“We all got out of the car, and that’s when it really started to go up in flames. The villagers quickly came and helped control the fire.”

The two passengers were transferred to the airport by another taxi. Mr Pakawat said he paid the fare for them.

Police were not called to the scene.