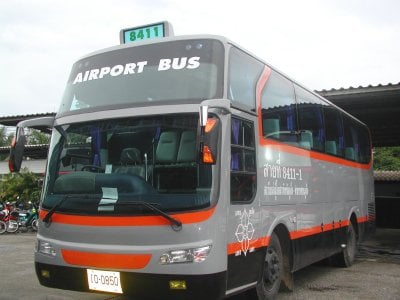 PHUKET: The island is to get a regular bus service between Phuket City and the airport, the Gazette was told exclusively this week.

The service will use four buses, each of them capable of seating up to 34 people. It will start at 5:30 am every day from Phuket City and 6:30 am from the airport. The last bus will leave the airport at 8:30 pm and Phuket City at 9:30 pm.

In Phuket City, the gray and orange buses will set out from the main Phuket City bus station on Phang Nga Rd, leaving the city via Mae Luan Rd, and stopping to pick up passengers at Big C; Tesco-Lotus; outside the Shell gas station near the Heroines’ Monument on Thepkrasattri Rd; near Wat Phranangsang in Thalang; and at the Nai Yang turnoff from road number 4031 (the old road to the airport), before arriving at the airport.

Permission to make other stops has been applied for. The full trip from end to end will take about one hour.

The return journey will follow the same route. Fares will range from 8 baht for one stop only to 52 baht for the entire trip. There will be discounts for passengers producing student ID cards.

Asked whether he thought the new bus service would run into trouble from limousine and taxi operators, a spokesperson for the company, speaking on condition of anonymity, said he thought it unlikely as the buses would be catering to a different market, consisting mainly of airport staff, students, Thai tourists or business people, and foreign backpackers.

He said, “Our prices are low, so there may be some effect on the songtaew (local blue buses) and minibus services.”

The buses will drop passengers at the departures terminal, but will pick up just inside the exit gate, about 200 meters from the arrival terminal.

So far, the operator, a new company called Phuket Mahanakorn Co Ltd, has bought two buses and registered them for the service. Two more will be bought and registered before the service starts on October 1, Teerayuth Prasertphol, Chief Technical Officer of the Phuket Provincial Transportation Office (PPTO), told the Gazette on August 30.

K. Teerayuth said that the PPTO would like to see more bus services running to the airport from other parts of the island, particularly the tourist areas on the west coast such as Patong, Kata and Karon.

19 die on Phuket roads in July

Decision on dog pound “in one month’