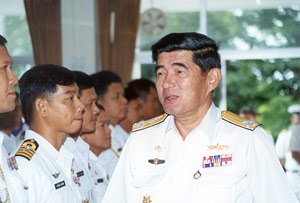 AO MAKHAM: The Third Naval Area Command bade farewell today to Adm Prasert Boonthong, Commissioner of the Royal Thai Navy, in a ceremony involving 300 sailors from five provinces. Adm Prasert, who will retire on September 30 and will be succeeded by Adm Taweesak Somapa. In an exclusive interview, he told the Gazette that he had no formal retirement plans after 45 years with the navy. “I want to relax and spend the time with my family. “I’m not interested in becoming a politician,” he added, although he said that he would welcome any future role that assisted the development of the navy. He will also be returning to Phuket, he said. “I’m still president of Phuket King’s Cup Regatta, so that means I have a chance to come back to Phuket and to visit the [naval] base.” On a more serious note, he told the Gazette that the Andaman Sea was an important zone of influence for the Thai Navy, especially with the Thai-Burma border currently being such a hot issue. “It’s difficult to gauge the territorial limits at sea, so when Thai fishing boats go out there’s a danger of them being arrested or harmed,” he said. “We try to let the fishing boats know the limits of Thai territory, though we will never support someone who breaks the law,” Admiral Prasert added. He said he believes there should be talks between the countries as soon as possible over the problem of fishing boat encroachment. Sailors from Phuket, Phang Nga, Krabi, Satun and Ranong provinces took part in today’s farewell ceremony.