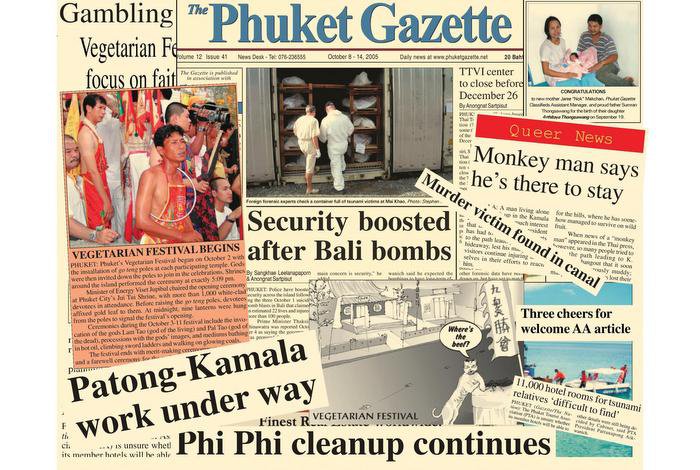 PHUKET: Those new to the island – relatively speaking – might not have the visceral churning in their guts when they hear the name ‘TTVI center’. However, island residents who were here at least a decade ago know that TTVI stands for Thai Tsunami Victim Identification.

The center was tasked with identifying 3,777 of the bodies recovered from the six tsunami-affected provinces. As of October 8, 2005, a total of 2,363 of the bodies were identified (619 Thais and 1,744 foreigners), which left no postmortem resolution for 1,414 people who had families and lived somewhere in the world before that day. (This of course doesn’t even take into account those whose bodies were never recovered.)

The TTVI center took the front page of the Phuket Gazette issue covering it ten years ago because the center was to be closed before the 1st year anniversary of the disaster, and the unclaimed bodies were to be turned over to the Justice Ministry’s Central Institute of Forensic Science. Such news is yet another way of helping those of us who came after the tsunami to attempt to understand the impact – emotional, physical, logistical and bureaucratic – of the waves.

The Gazette‘s inside story that issue, however, looked at the tsunami from a less stark and logistical perspective and more of an artisan one. It was that week that the Gazette explored a 25-piece modern art installation entitled ‘Post-Tsunami Solidarity through Eyes of Artists’, which had popped up on the once-again-pristine Patong Beach.

The Office of Contemporary Art and Culture felt that the exhibition would be a healing force that would boost locals’ self-esteem. Was it successful or not? If you remember it – write to us and let us know.

It really was a tsunami packed issue as the Gazette went on to cover Andrew Hewett’s work in spearheading the cleanup of the waters around Phi Phi following the nearly complete destruction of all man-made structures on that island on Boxing Day.

The Phi Phi Dive Camp completed the first stage of its project on August 14 with nearly 9,000 people helping to remove 250 tonnes of debris from the water and beaches. In total, 2,500 divers made about 7,500 dives as part of the cleanup.

Although the first Go Eco Phuket cleanup smashed records in 2012 for the amount of rubbish they picked up on a single day – it would have been only a drop in the bucket when compared to the sustained efforts of the Phi Phi Dive Camp. Ten years later, Mr Hewett and The Adventure Club continue to work with local officials on marine conservation projects in the area.

To read the entire October 1-7, 2005 issue, check out the Gazette archives online (here) – or, for those who have been around a while, start cleaning out the attic.