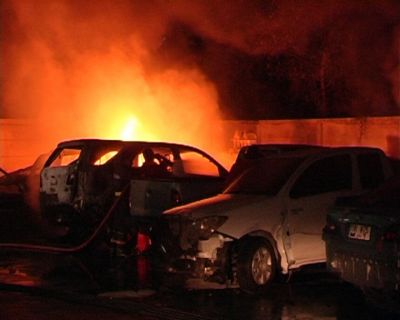 PHUKET CITY: Owners of three vehicles waiting for repairs will have to wait a little longer before being reunited with their cars following a fire at the Toyota Pearl Phuket showroom and garage on Thepkrasattri Rd early on Saturday.

Initial estimates put the loss from the fire at about 4 million baht, with damage to seven vehicles, four of which were totally destroyed.

Police said they have not found any evidence indicating arson. After questioning mechanics and the security guard on duty when the fire broke out, police believe that old car batteries stored at the garage may have caused the fire, which started at about 3:20 am and engulfed the row of parked cars.

“We are trying to assess the condition of the batteries that were said to be stored at the garage. If they were very dry or leaking, it is possible that a spark from one of the batteries could have started the fire if they became wet during the storm,” said Maj Pitakpol Somphong of Phuket City Police.

The security guard on the night of the fire said that he had not seen anyone in the vicinity and that there was strong wind and rain just before he heard an explosion in the maintenance area.

“The fire spread to the parked cars very quickly,” he added.