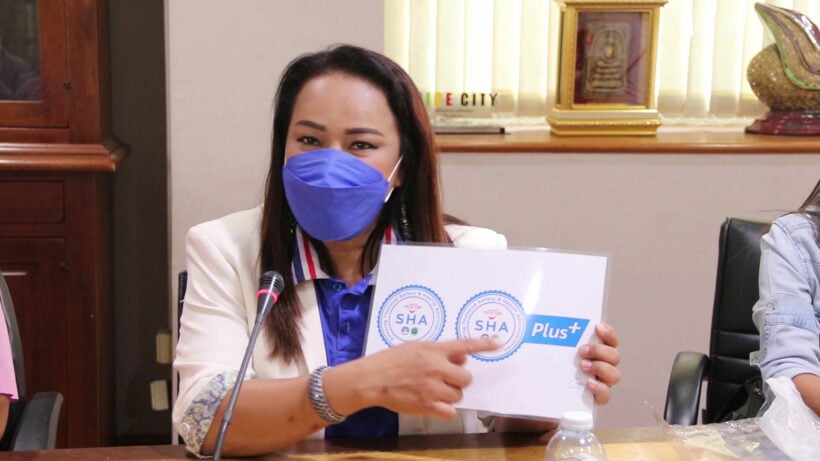 A number of business owners in Pattaya say they were duped into buying fake documents to certify that they meet standards set by Thailand’s Safety and Health Administration. When authorities inspected their businesses, they discovered the SHA+ documents had been fabricated. Some say they even paid thousands of baht to have the certification process expedited.

Around 20 business owners from Jomtien – Pattaya Entrepreneurs Club met Pattaya Deputy Governor Wuttisak Rurmkitjakan to complain that they had paid a high price for SHA+ certificates and other business documents, which they later discovered were fake. They say a person who identified themselves as a Pattaya official would ask for 3,000 baht to even 45,000 baht for services to help expedite the SHA certification process. The authority also offered business licenses and other documents.

One business owner says a person who claimed to be a Pattaya official offered him a way to fast-track the certification process, saying he would need to pay an “operation cost” for the service. Since many in Pattaya have been suffering over the past two years due to the lack of foreign tourists, the business owner agreed to pay a price for the certification to open sooner.

For the nationwide certification scheme, health authorities teamed up with the Tourism Authority of Thailand, allowing hotels, restaurants, and other businesses in the tourism industry to undergo an inspection and be given an SHA logo, marking that they meet quality health and safety standards during the Covid-19 pandemic.

The deputy governor admitted that some documents processed by Pattaya City Office took time due to the detailed inspection and assessment process. The deputy governor went on to say that a committee will investigate the complaints from business owners and those involved in issuing the fake documents will face punishment.

Soidog
5 minutes ago, Thommo said: I was staying in a SHA+ hotel which were proudly disply a sign saying 70% of their staff were vaccinated That one I do find strange. Vaccination protects the individual from severe symptoms. I’m not…

Soidog
29 minutes ago, JackMeOff said: Almost every beer bar in Pattaya Soi Buakhao open and many in Jomtien not eligible for SHA Certificate because cannot be classified as "restaurants" because no kitchen on premises.... but police ignore this covid business…

Guest1
So scammer are complaining publicly about, that the scam, to become SHT+ certified without fullfilling the needs, but for money , was a scam? You cant make this sh.. up. Shame them by name them

Cabra
Classic 😂 Thailand's government and businesses continues to do everything in their power to instill as little confidence in everything they do. The grift is astounding but sadly not unexpected.
ace035
From pretending to be a Thai officials to business owners Thai citizens, they are scamming each other.