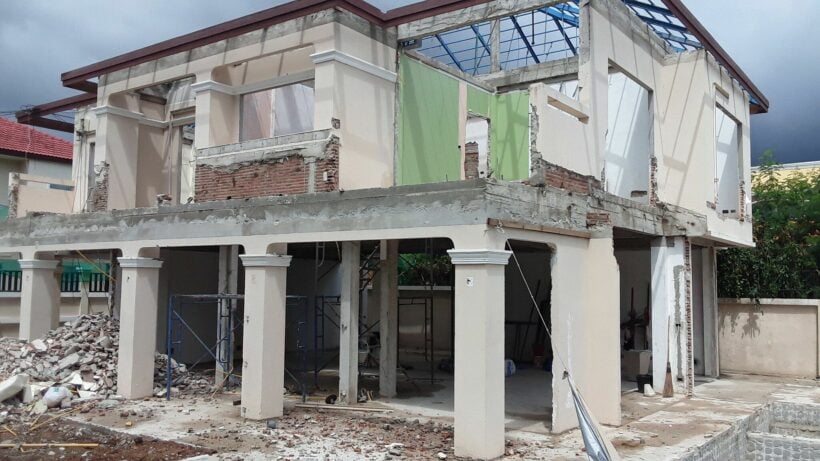 Pattaya-based architect, designer, and engineer, Mario Kleff, is at it again – demolishing another perfectly fine villa to make way for one of his designs. Just like the Majestic Residence on Pratumnak Hill project The Thaiger reported last week, the villa at European Home Place in Pattaya City, Bang Lamung District will be raised to the ground before being reconstructed by Mario and his team.

It’s understood that the owner of the property had initially consulted local contractors to carry out an internal renovation of the property until he invited Mario to look at the work. After uncovering several issues in the property and without being able to fix them, it was ultimately decided that Mr. Kleff would build a completely new property from scratch. So in roll the bulldozers!

Work began last week on the demolition, with plans to use the Wandeegroup’s patented Cellular Beams technology to construct the new building – just like the planned rebuild on the Majestic Residence site. Weather permitting, the new foundations are expected to be laid in the next few weeks.

We caught up with Mario to find out how these two Pattaya projects were landed in such a short period of time and to see what’s next for him and the Wandeegroup.

“The Majestic project was discussed some time ago, but the European Home Place one came out of nowhere! The owner phoned me one morning, asked if I’d take a look at what the other guys did, and it quickly became clear that work needed to be done” Mario explained.

“The original idea was only to renovate the villa, without replacing roof, walls, and structure, but then the owner said ‘let’s just start over – give me something special’ – so I said, let’s do it“.

Mario went on to explain his plans for Wandeegroup; “We really want to emulate some of the stuff we designed in South Africa and bring it to Thailand. Using the Cellular beams and prestressed concrete beams, we can create stunning looking properties, anywhere”.

Whilst this futuristic design might not be for everyone, there’s no doubt it’s eye-catching and you can imagine the stunning sea views from inside this ‘home’. It’s certainly a long way from the quaint little wooden shacks seen on the beaches of Koh Samui and Koh Phangan. But could this design become more popular in the near future?

Would you live in a ‘villa’ like this or do you prefer a more traditional, completely grounded property style?

Over 80% of massage shops in Pattaya closed “permanently”