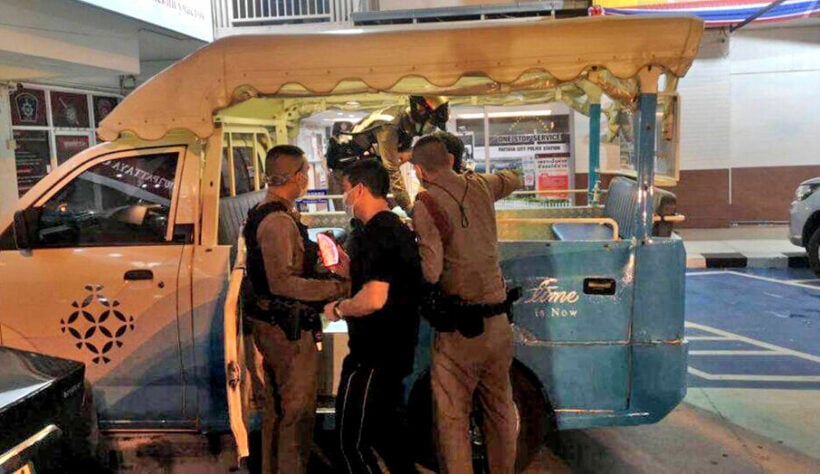 An incident last night when a 29 year old hotel staffer in Pattaya was injured after being attacked by a group of allegedly drunk Chinese tourists. Just before midnight the 29 year old employee was attacked and his wrists injured after trying to stop the “severely intoxicated” group from trying to drive home after several hours of drinking. He was given medical assistance at the scene.

The Pattaya News reports that an argument broke out when four Chinese tourists stated arguing with the hotel employee over their ability to drive back to their accommodations. The hotel reports that the group were drinking alcohol in their restaurant for “several hours” before attempting to leave.

Two of the group are then alleged to start attacking the hotel staffer. Witnesses say the other two in the group were then trying to intervene and restrain their two friends.

Two of the four Chinese tourists were later arrested by Pattaya Police after they arrived on the scene. They allowed the other two to return to their hotels after hearing all the stories from witnesses about their attempts to diffuse the situation.

The two alleged attackers were allowed to spend their evening at the police station to sleep off their intoxication. Police say they will be interviewing them this morning and decide if formal charges will be laid. The names of the hotel and the attackers have not been released by Pattaya Police.

Zorba_the_Geek
Ordinary Mainland Chinese are still locked up, they can't leave their apartments let alone the country. If they do finagle a hall pass, returning is a three week Quarantine nightmare -at their own expense. This was either ranking CCP clowns,…

Poolie
2 minutes ago, Zorba_the_Geek said: Ordinary Mainland Chinese are still locked up, they can't leave their apartments let alone the country. If they do finagle a hall pass, returning is a three week Quarantine nightmare -at their own expense. This…
Zorba_the_Geek
On 4/13/2022 at 3:11 PM, Nivram said: Thais don't stop Thais from driving after being intoxicated. That is hipocritical. No, that is "face". Friends don't let friends lose face. And the other famous Thai road safety slogan "Don't Drink Drive…
Zorba_the_Geek
7 minutes ago, Poolie said: Only if you live in Shanghai and that's all over with now anyway. Get up to date mate! 😃 Nope. Guangzhou will be locked down by the weekend, why? Because I surf; and I know…

Poolie
25 minutes ago, Zorba_the_Geek said: Nope. Guangzhou will be locked down by the weekend, why? Because I surf; and I know things. You read it here first. You have a point about Shanghai, but I play the game the CCP…