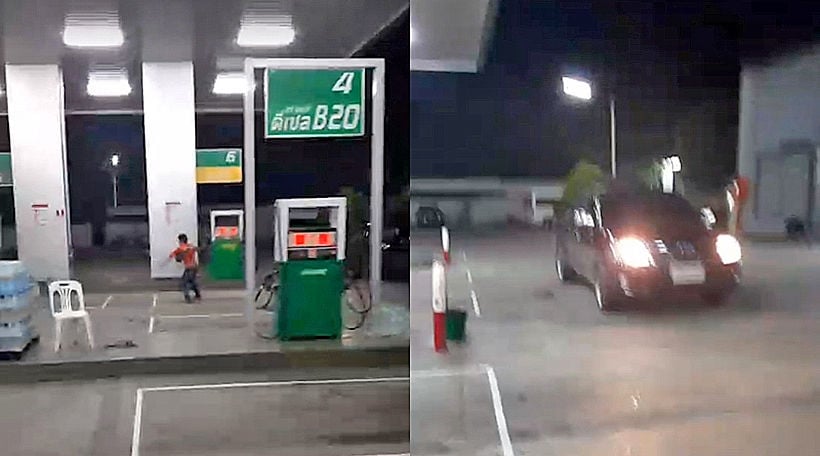 An employee at a Chonburi gas station has told a Sanook news team how the behaviour of an angry truck driver left her and her colleagues terrified.

Niracha, aged 23, used her phone to record a video of the angry customer driving at speed around the gas station and throwing alcohol bottles at another customer. Her colleague Atirut Someprasert posted the video on Facebook, with a plea for help to find the driver.

“If anyone sees this truck, please let me know. The driver tried to beat the gas station employees. If anyone knows the driver or has any information, please help us. Please share this post.”

Thai Residents reports that the incident took place at 2.30am last Wednesday, when a black Toyota truck arrived at the gas station and the driver went to use the bathroom. There, he appears to have gotten into a fight with a motorbike rider who had parked his bike in front of the bathroom while making some purchases at the convenience store nearby.

A verbal dispute quickly turned violent when the truck driver started grabbing alcohol bottles from his truck and launching them at the other man. He then proceeded to get back in the truck and drive at speed around the forecourt, trying to hit other customers and gas station employees.

Niracha, who used her phone to film the scene, says employees were all extremely scared and had to run and hide for fear of being hit by the truck. She says the man eventually drove off, but social media users are busy sharing the Facebook video of his actions in an effort to identify him.