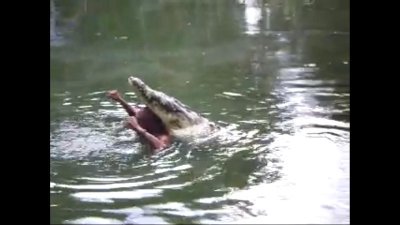 PHUKET: Animals leaped into the world’s news headlines this week with scary, silly and sad stories to report.

A FUGITIVE monkey who has been on the run from Ohio police since Tuesday night is presumed dead, eaten by one his “big cat” accomplices.

One of the 18 tigers or 17 lions among the 58 animals who were set free from the Muskingum Exotic Animal Farm late Tuesday night by their owner are thought to have eaten the Macaque monkey.

Police have now officially ended their search for the monkey.

Sherrif’s deputies shot and killed 48 of the animals after Terry Thompson, the owner of the farm, opened all the animals’ cages before committing suicide, the Telegraph reports

His body was found close to the cages with bite marks to the head. They are believed to have been inflicted shortly after his death by one of his large cats.

With wolves, tigers, bears and lions on the loose, schools were closed in the Zanesville area on Wednesday and flashing signs along highways warned: “Caution exotic animals” and “Stay in vehicle”.

Police officers were under orders to shoot to kill all animals when the alarm was first raised in the early hours of Wednesday morning due to fear the animals would evade capture under the cover of night.

Muskingum County Sheriff Matt Lutz said public safety was his primary concern and that his “suspects” were not everyday house cats or dogs, but “300 pound Bengal Tigers”.

Animals rights activits have been voicing their outrage at the shootings.

HOAX of the week: Monster slipper fit for a giant delivered to man’s home

A SLEW of British newspapers were caught up in an elaborate hoax this week about a man who mistakenly received a size 1,450 monster slipper – big enough for him to sleep in.

The Telegraph, Daily Mail, Mirror and other major newspapers reported that Londoner Tom Boddingham, 27, ordered a custom-fit size 14.5 monster slipper from Hong Kong, but the manufacturer misplaced the decimal point and sent him the giant slipper, measuring seven feet long.

The Guardian today reports the story to be an elaborate PR stunt from Monster Slippers, and the “real” Tom is actually a bloke called Jospeh Jennings, none other than the web manager for the slipper company.

Tears for last act of Pocho the crocodile

ONE of the world’s most famous crocodiles was given a heroe’s funeral this week.

Pocho, a 14-foot-long crocodile, was a local legend in Siquirres, Costa Rica, a small banana farming town. Pocho and his owner Gilberto Shedden, 54, were a double act called Tarzon Tico.

Their weekly Sunday shows were a much-loved tradition in the town. They used to wrestle each other much to the delight of locals and thousands of internet fans around the world.

Hundreds of locals lined the streets to pay their respects to the 70-stone Pocho and Gilberto, wearing his trademark loincloth, sat alongside his beloved friend for the funeral procession.

Tarzan Tico performed for eight years, putting on shows that helped put the Caribbean town on the map.

Gilberto found the Pocho in a river badly injured from a gunshot wound to the head 20 years ago. Her nursed Pocho back to health and the two became best friends.

Pocho’s body will be embalmed and put on display in a local museum.

Click here to see some of Tarzan Tico’s amazing acts.

Weird World News: Stuck in the middle of a tree, a swing and the Amazon with misguided men and lone alien