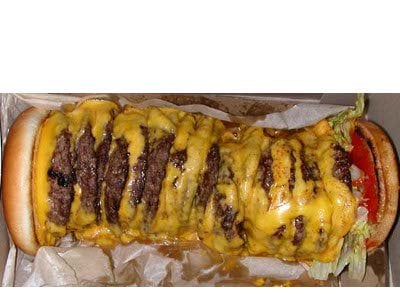 PHUKET: You are what you eat. Diners at “Heart Attack Grill” should remember this. So should competitors in dumpling-eating competitions and anyone else who ingests alien-objects or pain-inducing toxins into their body without thinking about it. This week’s Weird News round-up is a grim reminder to avoid what’s not fit for consumption.

DINERS took photographs of a man suffering a heart attack at the Heart Attack Grill in Las Vegas earlier this week, thinking it was a stunt (click here to see video report).

But the man, who was scoffing down a Triple Bypass Burger, wasn’t playing along. He was having a heart attack.

Heart Attack Grill’s owner, Jon “Doctor” Basso (not a real doctor) said he first thought the man was joking, but quickly realized he wasn’t and called 911.

He said even though the restaurant has a morbid sense of humor, “We would never pull a stunt like that.”

The restaurant’s slogan is: “Taste Worth Dying For”. The incident comes one year after the death of the restaurant’s 575-pound, 29-year-old spokesman.

The unnamed man is reportedly alive and recuperating. It is not known if the man thought the taste was worth dying for.

A UKRANIAN man munched his way to win a dumpling-eating contest and then promptly died last week.

The 77-year-old champ ate 10 dough balls in record time, received his prize of a jar of sour cream, but then complained he felt ill.

The man, Ivan Mendel, vomited and then collapsed. He was dead before the ambulance arrived, InterFax news reported.

The dumpling-eating event organizers struck out at accusations the contest had killed the man, saying he only had 10 dumplings despite eating them in 30 seconds.

No other injuries were reported at the competition. It is not known if the event will be held next year.

A MAN who persuaded his brother to eat an ounce of cocaine as they were in the back seat of a police car has been charged with his death.

Wayne Mitchell, 20, died an hour after ingesting the drug his 23-year-old brother Deangelo gave to him, the Daily Mail reported.

The incident was caught on camera as the two sat in a police car in South Carolina in November last year. The pair was pulled over by police for having a faulty headlight.

Officers put the brothers in their squad car and then searched suspects’ vehicle.

Deangelo is heard on the film telling his younger brother to swallow the drug, because if he is found with it, he will spend the rest of his life in prison.

A toxicology test determined the cause of death was from ingesting cocaine.

DeAngelo Mitchell has been charged with the involuntary manslaughter of his brother.

Weird World News: Sightings of a woolly mammoth, a giant river worm and zombies cause concern on planet Earth