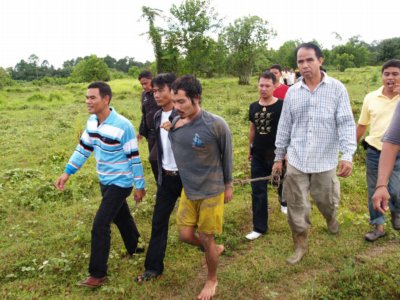 NAKHON SRI THAMMARAT: “Banana Tree Aek” – feared rapist of women, domestic animals and fruit trees – was finally taken into custody by police August 27. His excuse for his animal raping antics was, according to police, “everybody does it”.

Aekarat Dapngen, 23, was wanted for the rape of several women and animals in Nakhon Sri Thammarat City’s Ton Wah community, where he had been the subject of a month-long manhunt by police and a local vigilante squad. The last victim of the sword-wielding glue addict was reported in July, when he raped the mother of a newborn baby.

Aek’s reign of terror ended at 4 pm August 27, when officers led by Pol Lt Col Chawasil Bunpradit, Deputy Superintendent of Investigation at Nakhon Sri Thammarat Provincial Police Command, sneaked through woods to launch a surprise raid on a shack in the middle of a field in Tambon Kaphaeng Sao.

The raid followed reports that the deviant was hiding out in the shack, about four kilometers from his home.

Cautiously approaching the hovel and peering in, officers saw Aek lying on the floor writing. After spotting the approaching cops, Aek raced across the surrounding field trying to emulate his previous successful escape – when officers were left holding his shirt and trousers while he raced off to freedom in just his underwear.

This time Aek was not so lucky. He was tackled in a ditch by a police officer.

Back in the hut, officers found a tin of uncooked rice, some glue and a large knife. Written on the floor in correction fluid were descriptive accounts about what was apparently Aek’s object of desire at the time: cows.

On hearing of Aek’s arrest, local villagers rushed out to get a glimpse of the madman who had been terrorizing their community.

Police said that under questioning Aek had confessed to the rape of the young mother and said that he had been hiding in the shack and living off uncooked rice. Asked what had possessed him to rape cows and satisfy himself with banana trees, police said Aek replied, “Everybody does it.”

No mention was made of what charges will be brought against Aek.