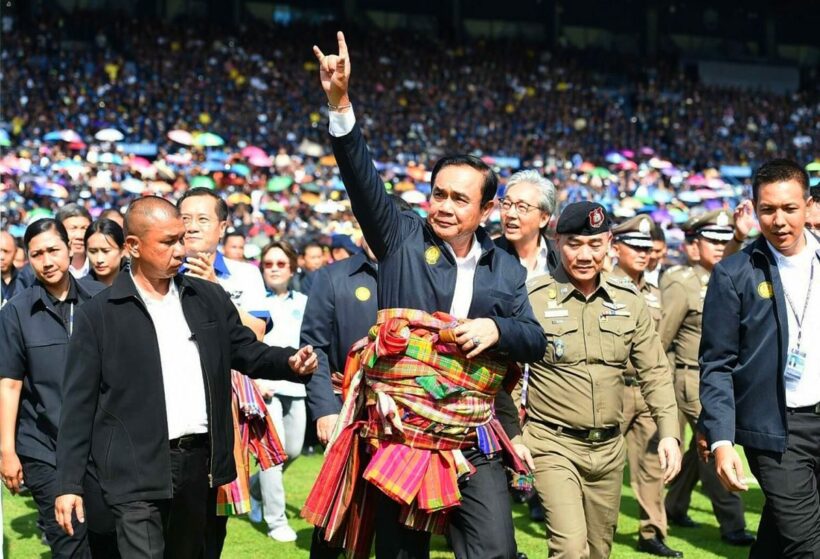 Despite his protestations to the contrary, the Thai PM is leveraging himself exactly where he needs to be 9 months out from the scheduled national election. A day in the north-east, courting his former red shirt foes, shows that there’s little integrity in politics, no matter who or where you are.

Still, completely straight faced, the PM was marching around Buri Ram yesterday, chatting casually with locals and wooing political officials with a 20 billion baht development budget. In any other country this is called ‘pork-barrelling’. In Thailand it’s called business – the business of politics.

Taking to the stage in front of 30,000 locals, PM Prayut appeared comfortable wooing voters that still have allegiances to the Shinawatra family.

In the 2011 election, where Pheu Thai easily won, installing Yingluck Shinawatra as the country’s first female prime minister, they won 265 seats. The Bhum Jai Thai Party, based in Buri Ram, came third, behind the Democrats, when it gained 34 parliamentary seats.

Out of a parliament with 500 seats, unless the PM has magically made his way into the hearts of the country’s rural heartland, he faces a huge deficit if he wants to be installed as an ‘outside PM’. His strategy is improved with the start-up parties which will fragment some of the past polarised Pheu Thai/Democrat vote. If no party gets at least 250 seats, or can pull together a coalition, then the new constitution allows for the appointment of an ‘outside prime minister’. This is clearly, and unashamedly, the game the Junta leader is playing.

By just adding the Pheu Thai and Bhum Jai Thai party vote together from the last election, the ‘red shirts’ are well over the threshold to command power in the new parliament, again.

But if Prayut was able to win the support of Bhum Jai Thai party MPs he has the chance of getting over the line, along with the Democrats and some of the new Army-friendly political parties. It would be odd alliance indeed. But, hey, it’s politics.

To have any hope of making this happen he needs to woo the very politicians his army-led coup threw out of office nearly four years ago. But whether Prayut gets to hold on to the top job, the Junta has already crafted a new constitution, with the army-appointed National Legislative Council, that will see it pulling the strings of any ‘democratically’ elected government for the foreseeable future.

Reported in The Nation today…

“In Surin, where Prayut visited a local silk village, he was greeted by 3,000 people. Provincial authorities, meanwhile, are expected to ask the Cabinet to grant over 84 rai (13 hectares) under the Department of Highways to build a new customs checkpoint. The current Cambodia-border checkpoint at Chong Chom last year saw total trade value of 3.01 billion baht with key local products being fuel, juice drinks and soft drinks.”

You get the idea.

COMMENT: What does it take to change driving habits?