Two Thai men, probably at the peak of their careers. One inspiring a nation. The other making disgraceful comments and ‘mis-speaking’ about the death of a young cadet and laughing off the serious issue of hazing in Thai military culture.

It’s been a busy week for the country’s elderly Deputy PM and Defense Minister Prawit Wongsuwan and musician/marathon runner, Antiwara ‘Toon’ Kongmalai, the lead singer of Bodyslam who is in the middle of a 2,191 kilometre charity run.

On Wednesday Prawit spoke to Thai media about about the horrible case of yet another mysterious death of a young Thai soldier under his care. This time a death at the Armed Forces Academies Preparatory School in Nakhon Nayok saying that the 18 year old cadet died of natural causes, probably heart failure. He didn’t actually know the cause because an autopsy hadn’t even been started at the time he made the remark. But he was on a role. He went to say… “that it was usual in the Armed Forces Academies Preparatory School for pre-cadets to be subjected to corporal punishment or “som” when they did something wrong and he himself used to be punished until he went unconscious, but he survived the ritual”. (PBS English)

Asked by a reporter how to protect cadets from being abused by the older cadets and ranked soldiers to the extent they could be seriously injured, the deputy PM is quoted as saying… “Then, they don’t have to enrol, don’t become soldiers; we only want men who are willing.”

His comments were both insulting to a grieving family and completely irresponsible when hazing, violence and beatings are an ongoing problem in the culture of Thai military training. There was already mixed messages coming out of the Government over the botched handling of the death of 18 year old Pakapong Tanyakan on October 17. There were so many questions and the media, rightfully, were seeking answers. This one in particular, “Why were the cadet’s organs removed before the body was returned to the family”?

The father, Pichet Tanyakan, a popular racing car driver, says he secretly removed his son’s body from the temple, where his son’s body was awaiting funeral rites, to a hospital for an autopsy. The ceremonies proceeded without anyone knowing the coffin was empty. The autopsy found that some internal organs were missing – including his heart, stomach and bladder – and the skull was empty, filled only with tissue paper.

Yes. I’d have a LOT of questions directed towards the people who had been entrusted with my 18 year old’s education and care. I’d also have some pointed questions to the man in charge of the Defence Ministry.

Prawit later apologised for his insensitive comments and promised a ‘full and transparent enquiry’. Two officers at the School have since been dismissed and the enquiry is underway. Whether it will be truly ‘transparent’ is yet to be seen.

The country’s defence minister has crossed a line this week providing us, if we needed any, additional evidence that the Thai military has a culture of hazing, thuggery, violence and rituals and a history of mystery deaths of aspiring soldiers. His defence, mis-speaking and apparent cover-ups over these issues is a scary example from the country’s Number Two in command. 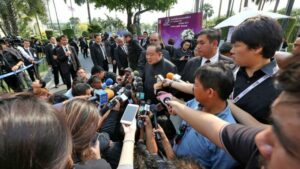 In stark contrast a mere rockstar, the lead singer for Bodyslam, Antiwara ‘Toon’ Kongmalai, has been pounding the pavement in a bid to raise awareness and much-needed funds for Thailand’s public hospital system. His charity run – 2,191 kilometres from Betong in Yala to Chiang Rai – is ahead of schedule to raise over 400 million baht.

The 38 year old, already popular for his musical successes, has been setting a highly public example of charity, inspiration and good nature in a humble and spirited illustration of traditional Thai values. Everywhere he goes he attracts huge crowds and is winning praise from all sectors of Thai society, even the good wishes of the Thai PM and HM The King. His country-spanning run has also raised crucial questions why a rock-star even needs to raise money for a public hospital system.

As a political statement, we hear Toon’s cry loud and clear. As an example to Thai youth as to how to conduct yourself in public and how to channel your energy and ambition, there could be no better path to follow. 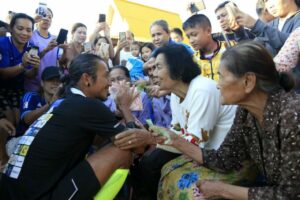 So whose name would you prefer to be ticking on your ballot at next year’s Thai elections (if you could vote)? A crusty, 72 year old, military stalwart who appears to have a problem telling the truth or a 38 year old who inspires people with his actions? The media have already zoned into the elephant-in-the-room question if the popular singer and part-time runner has political aspirations. So far Toon has brushed off the speculation in his usual humble and good-natured way.

Even if this moment is transitory, Toon’s inspiring run has been bringing people together across the political spectrum in a way the Junta simply can’t. Across different religious backgrounds, red and yellow shirt, Toon’s run is resonating a unifying tone at a time Thailand must regroup for the political challenges looming large in 2018.

His trek through the southern ‘badlands’ of Yala, Pattani, Narathiwat and Songkla – where over 6,000 have died in a long-running religious conflict – did more for reconciliation than dozens of well-meaning politicians have achieved in twenty years. Of course, it’s all strings and mirrors, a surge of good vibes and well-intentioned public relations, but Toon’s tour through the South has unified people from all religious divides. Well, at least it’s provided a pleasant diversion from having to worry about bombs going off when taking their kids to school. 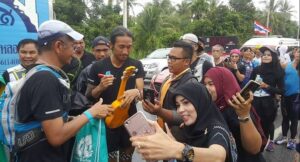 General Prawit has survived the latest purge of the Thai cabinet – more of a complete renovation than a mere ‘reshuffle. His ‘really bad week’ with the Thai media will have been noted by his boss, PM General Prayut. He will surely be pursued by the Thai media to follow though with his promise of a ‘full and transparent investigation’.

For Toon, he still has a long way to reach Chiang Rai by December 25. His popularity and coverage by mainstream and social media is still on the rise. By the time he gets to the north of Thailand he’s going to have many, many doors opening for him, whichever path he chooses after his marathon.

Bodyslam’s last single was ”Wala Tao Nun” which means “everything will have the answer in time”.

NGO taking the government to court over food pesticides