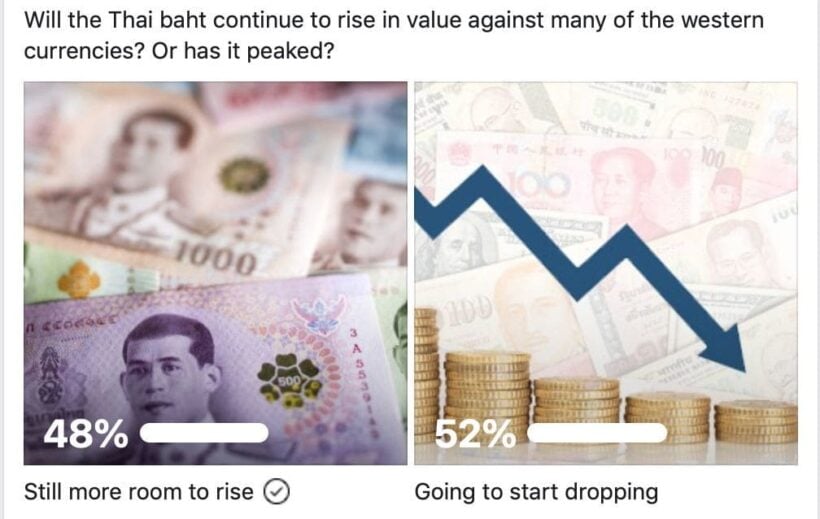 Yesterday The Thaiger polled our Facebook readers asking them…

“Will the Thai baht continue to rise in value against many of the western currencies? Or has it peaked?”

Your responses were very mixed but the result was a slight leaning towards the baht dropping, but only by 52% to 48%, from 585 votes. Thanks for participating!

Here are few of the responses (edited) ….

• A currency will always peak at some occasions due to the economic safety of that country. But unfortunately a strong Baht will make exports to other countries more expensive which could lead to countries going to other countries where their money goes further. The Thai economy is also dependent on tourism which a strong Baht will lead to more expensive holidays for foreign tourists. This could also lead to a shrinking of the economy. – Graeme B

For a country that relies so heavily on tourism and exports, an over inflated, domestically propped up currency is a very risky fiscal strategy. There was a 5.8% drop in Thai exports in May, this is a HUGE number, and alarm bells should be well and truly ringing. A lot of people linked the fall of the GBP to Brexit…. Although not great for FX, the effect on British exports has been seismic. – Simon H

• At the moment the west doesn’t want to use the R word. But that’s what it is, it’s a recession. It will get worse before it improves. – Scottie C

• Depends if China keeps draining the world of money in trade. If they do, THB goes up. If world finally pushes back, there is a correction in Thailand. Sadly, Thailand is now one of the largest proxies for constant Chinese credit creation. Suvarnabhumi 2.0 is basically being built for China to come deliver money. – Matt S

• Thailand is more expensive than the UK, many people how holidaying in Cambodia ?? and Vietnam ?? much more for your money. – David H

Anthony was perhaps closer to the truth…

And Malcolm gave an answer without giving an answer…

• Watch this space, I am sure something will happen in the next six months, the question is what? – Malcolm N

The Thaiger will be conducting daily polls on our Facebook page. ‘Like’ us and join the conversation.

Banned. Thai airports cracking down what you can take on board