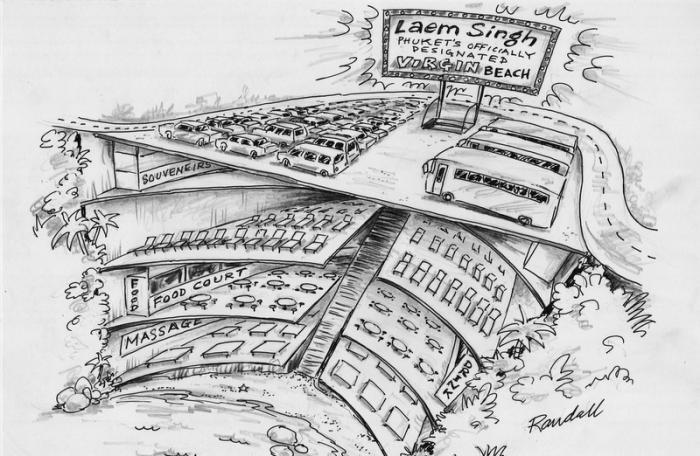 PHUKET: The controversy at Laem Singh Beach is just the latest in a long history of beach access disputes in Phuket, but this case raises so many issues that it is difficult to know where to begin the discussion.

Taking power almost three years ago, Gen Prayuth and cohorts correctly made Phuket one of their top priorities, imposing measures to tackle long-standing, corruption-driven problems in the island’s tourism industry.

The tuk-tuk mafia, encroachment on national park land and other sins of the past were targeted under the so-called ‘restart’.

The government reiterated that all beaches were public property and – in perhaps its most unexpected move – removed all vendors therefrom.

Just as shockingly, some local leaders were charged for having illegally used beaches in their jurisdictions to amass vast personal fortunes by illegally divvying up the sand and allowing vendors to operate there on a concession basis, with the concession fees flowing into the pockets of those individuals.

Almost three years and three high seasons behind us, the beach loungers have returned and, it seems, we are returning to the status quo, albeit inside of the ’10 per cent zones’ where vendors are now allowed to operate.

Throughout almost all of this period, the situation at Laem Singh has existed in a vacuum, beyond the rules for all island beaches, as if Laem Singh were somehow on an island apart.

Despite Laem Singh’s designation as a so-called ‘virgin beach’, the self-proclaimed ‘local’ vendors remained in operation even while a Bangkok-based company continued to charge ‘tourists’ (read: foreigners) for the right to access the beach through property they claim as their own.

The decades long issue as to whether the claimed private ownership of that property is legitimate has yet to be ruled on by the courts. In the latest twist, the vendors who called for such an investigation are now being denied access to the beach by this same company.

This has resulted in some high irony, with the vendors now literally protesting for their ‘right’ to conduct illegal business there.

This is reminiscent of reports from China a few years ago about students protesting over withdrawal of their ‘right’ to cheat on exams. And just as ironically, the vendors’ demands are now being carefully considered by local authorities.

It’s anyone’s guess as to what will happen next – or what Laem Singh might look like in ten years’ time.

Ministry of Farang Affairs: The maid will never tell you