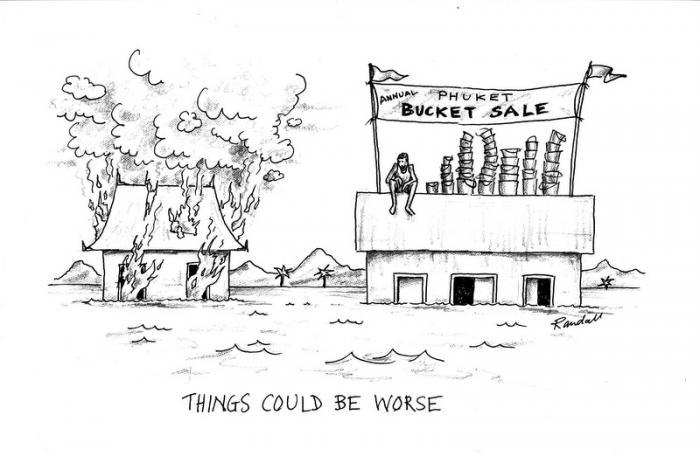 PHUKET: As the annual monsoon strengthens and the gripefest begins, Phuket residents might want to pause for a moment to reflect on what a wonderful climate we enjoy year round, every year.

That is a narrow range of about 20°C that is somehow perfectly centered at about 27°C, roughly the same temperature at which many of us set our air-conditioners – near optimal.

Compare that to a place like Montreal, Canada (high 37.8°C, low -37.6°C) to better appreciate just how good we have it here.

We also have it better than other Thai provinces. Temperature fluctuations in Phuket are moderated by the sea that surrounds us and generates cooling sea breezes most of the year.

We also seem to be ‘off the beaten path’ for major storms. When was the last time the island took a direct hit from a tropical depression or typhoon of the types that pound the coastline along the South China Sea? Never, at least as far back as this long-time observer can recall. The cherry on top is the fact that the rain eases up during winter, making it an ideal escape for tourists from harsher climates further north.

One of the few drawbacks to living in such a climatic glass bubble is that over time we get spoiled. We wear thick sweatshirts to the cinema. Like Goldilocks, we wake up in the middle of the night, changing the temperature of the A/C unit by a single degree, because it is either too hot or too cold. It’s hard to imagine what our ancient ancestors would think if they knew what ‘weather wussies’ we have become.

Of course it is human nature to complain, so with the lack of truly severe weather we tend to direct much of our weather whining toward the only thing left: the rain.

In reality, the copious amount of rainfall here should be counted as a blessing. Unfortunately, in our collective rush to cover this island with concrete and bitumen, we have managed to destroy or disrupt many, if not most, of the natural watercourses that once channeled all this runoff harmlessly into the sea. The inevitable result, of course, is flooding.

Karon has seen the worst flooding in decades this year – and the rainiest months of the year are still ahead of us.

Let’s hope that flood prevention measures put in place by authorities across the island help turn the tide on Phuket’s completely man-made and ever-worsening flooding problem.

Ministry of Farang Affairs: Careful in the crapper