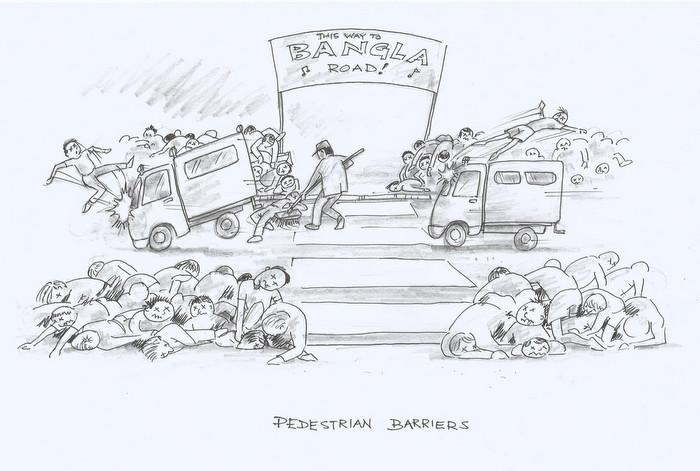 PHUKET: The introduction of traffic barriers to stop pedestrians crossing Rat-U-Thit 200 Pi Road in Patong serves as yet another reminder that the traffic problem in the tourist town could be vastly improved by the introduction of a simple, reasonably-priced public transport system.

Patong Police and Patong Municipality, the forces behind the barrier project, believe that not having pedestrians venture out into the dangerous one-way road will also help ease traffic congestion in the area, which is particularly hazardous late at night due to the level of partying there.

But while these barriers might bring about marginal improvement in traffic flow, the main cause of the traffic problem in Patong could not be more obvious: the ridiculous overabundance of tuk-tuks.

The National Council for Peace and Order (NCPO) deserves credit for its unprecedented effort to put illegal transport syndicates and other ‘mafia groups’ and ‘influential figures’ out of business – but there is clearly still a long way to go.

We hope the NCPO’s next public transport initiative for this island will be to launch an honest and genuine public transport option for Patong. All that would be needed is a simple songthaew (passenger truck) or bus service of the kind that is readily available in just about every other major urban area of Thailand – including Pattaya.

Such a service would be enormously popular with both tourists and local residents, allowing many to leave their cars or motorbikes at home – without having to deal with rude, price-gouging tuk-tuk drivers or risk their lives on the back of a motorbike taxi. With such a service, traffic congestion would improve immediately.

Of course, the reason such a service has never been launched in Patong is precisely the same reason the traffic is so bad: tuk-tuks – and their self-entitled, thuggish operators who have done so much damage to the island’s tourism industry over the years.

The Department of Land Transport has long stated that it would accommodate any private operators wishing to offer such a service, yet none has thus far dared to incur the wrath of the tuk-tuk cartel.

Patong’s tuk-tuk drivers have stood in the way of progress for decades. They protested the closing of Bangla Road to traffic when the ‘walking street’ was established not long after the tsunami. They also protested the introduction of the one-way road system that went into effect in 2007.

The need for real public transport in Patong is long overdue. The NCPO’s mandate includes restoring social order, rooting out corruption and ‘returning happiness to the people’. There is no better time than now, under the NCPO, to turn the tables on the tuk-tuks and give Patong tourists and residents a new, safe and inexpensive public transport option.