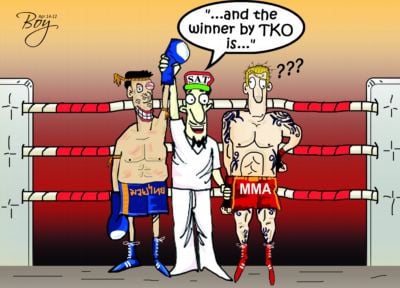 PHUKET: The recent ban on mixed martial arts (MMA) events by the Sports Authority of Thailand (SAT) is a sad but unsurprising development, and one which will deprive growing numbers of MMA enthusiasts in Thailand from watching these exciting events live, while costing the country millions of baht in lost revenue. (See current issue of the Phuket Gazette.)

Thailand is certainly not alone in its squeamishness when it comes to MMA. In the USA, the country where the sport flourished though television broadcasts and the formation of the Ultimate Fighting Championships (UFC) in the 1990s, the sport is still banned in a handful of states, ostensibly for safety reasons.

With the rapid expansion of satellite television coverage, there are few places where those interested in MMA cannot watch it. Here in Phuket, cable television operators frequently broadcast MMA events. UFC events are also among the most popularly shared files online, with a flurry of download activity as soon as the most recent event is uploaded.

As its critics are quick to point out, MMA can be brutal, but it is precisely this aspect of the sport that makes it so engaging for viewers. Nobody is forcing those who can’t stomach the violence to watch – and to our knowledge all the fighters who take part are adults who do so willingly.

This is in contrast to the nightly spectacles staged in places like Patong where children as young as six years deliver kicks to one another’s heads for the amusement of the crowd.

From a safety aspect, concerns about serious injury and death were justified in the early days of MMA, but changes to the rules have made the sport surprisingly safe. Enough time has now passed to indicate the risks are probably less than in conventional Western-style boxing, and far less than in activities such as race car driving.

Thais are justifiably proud of the Muay Thai tradition, but it should be remembered that gloves were introduced to the sport only in the 1920s. While the sport is no doubt safer as a result, boxing gloves render traditional clinching techniques somewhat awkward and unnatural compared to MMA and muay boran (‘classical’ fighting without gloves).

The decision to ban MMA events in Thailand probably has more to do with cultural pride and protection of the global industry that Muay Thai has become. The irony is that the rise of MMA has probably been the single largest factor fueling this growth, because top MMA fighters need to master core Muay Thai techniques to have any chance of success. The proof is readily apparent here in Phuket, which is home to several Muay Thai camps. Although their input is largely unappreciated by the authorities, they play an important role in attracting long-stay tourists year round.

History provides us with a rich tapestry of violent “sports” that would never be allowed in the modern world: jousting competitions and gladiator tournaments spring to mind.

Yet the type of hand-to-hand fighting of the kind currently manifested as MMA far predates even these ancient combat sports. It has been around since time immemorial and it is here to stay – regardless of what the Sports Authority of Thailand has to say about it.

Phuket Opinion: A tiny price tag for saving the mangroves