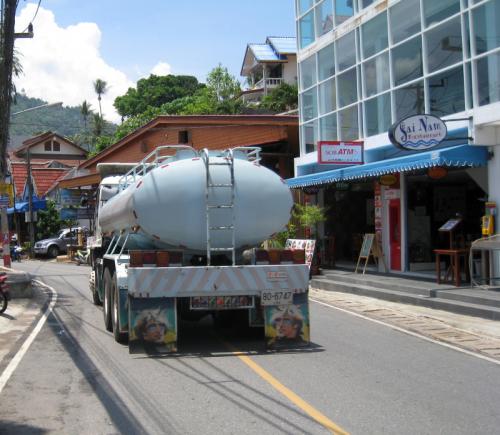 PHUKET: Many places on this planet, including Phuket, are going through one of the driest spells of the last decade.

My home state of Colorado is no exception. Denver, the state’s capital, only two weeks ago declared a stage-two drought, based on a scale on which four is an emergency.

With its two prime reservoirs at 59% and 73% capacity (sound familiar?), the city’s waterworks estimate that it needs to conserve 16 billion gallons to avoid graduating to a stage three situation by next year.

Indeed, the situation – in Denver and in Phuket – seems dire.

Yet on at least 10 occasions over the past three months – during this supposed drought – I’ve been caught in traffic behind a provincial water truck whose sole purpose is to spray water on the road.

Take a walk up Toh Sae Hill in Phuket Town for some exercise, and you may be forced to move aside for the water truck on its daily rounds, spraying tens of thousands of liters of water to clear off the human litter and spoiled organic left-overs that the monkeys there didn’t want to eat.

In the neighborhood near my office, water trucks regularly cruise through cleaning up the dirt piles and spills from construction of new subdivisions in the area.

But it’s not really the construction crews taking responsibility, but rather, you and I – taxpayers – who ensure that our island’s trusty water trucks can keep things “clean and orderly”.

We should be taking advantage of our ideal tropical location.

First we should continue to promote and invest in rain collection during the wet months.

Then, let’s sell off all these water trucks. A chain-gang of well behaved prisoners with some cheap bags and brooms is one idea to keep Toh Sae Hill, among other places, nice and clean.

As for who should clean up construction spills, I’ll leave it to your imagination.

Finally, with the money earned from selling the water trucks, let’s build solar distilleries all along Phuket’s coasts. These could be simple greenhouses designed around two reservoirs – one to pump in raw sea water, and one to store clean potable distilled water.

The pumps could be powered by free photovoltaic energy from the sun, and the distilling process would be a basic, automated condensation-drip mechanism.

And the biproduct of salt could be refined into table salt pretty easily too.

Now if only we could convince and educate those in charge to share such a vision.